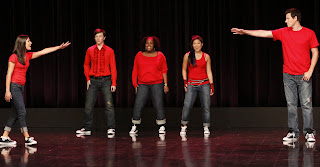 It interested me that these songs could reach such a high spot before the show even aired. After the show aired I checked back with iTunes to see where the songs fell. Turns out that this weeks songs “Halo/Walking On Sunshine” and “It’s My Life/Confessions Part II” were now at numbers 13 and 11 respectively. In 48 hours the songs jumped over 70 spots and now resided inside the top 20 songs on all of iTunes. Furthermore, the songs marquee song “Don’t Stop Beilieving” jumped one spot, from 45 to 44 although it made no appearance on the show.

This means that not only are people going crazy, buying the songs before and after the shows, they are sticking around and checking out the other music. In many cases they are walking away with multiple songs and perpetuating this amazing market.

As if this wasn’t cool enough, I found at that Journey’s original version of “Don’t Stop Believing” was on the charts ten behind the “Glee” version. Finally it intrigued me that thirteen out of eighteen songs featured on the show were currently on the top 200 chart. If your into doing the math, that’s a little more than 6.5% of the chart occupied by a television show. Let’s remember, these are not recordings by recording artists. They are instead master arrangements sung by talented singers on a television show.

This whole premise got me thinking of how the music industry has evolved and where it will continue to evolve too. We have already seen that video games can do wonders for artists and their album sales. The question is where the line will be drawn. Another Fox show “American Idol” made music a primetime event unlike any other. “Idol” spun into record deals and tours for the artists involved. The problem is, that show was designed to find the best singer, not to be a lasting one hour dramedy.

At what point will we finally see a “Glee” cast tour the country performing all the covers that got the show famous. Will there be live appearances by a cast that was plucked from the ranks of Broadway? Also, my feeling is that there could come a time when the cast and crew say screw it. Screw the plot, screw the story, screw the camera’s, let’s just make music because we do it better than many of the artists out there. It not only seems probable to me, but likely. This continues to blur the line between television and music as one show in it’s first season has taken the music industry by storm, making me wonder what is next?