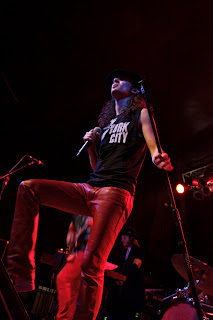 I’ll be the first one to say it. I don’t like Bono, I don’t like his message, I don’t like the idea that as a singer he is the leader of change in the world. Don’t get me wrong, U2 is great and they’ve done some amazing things over the years, my problem lies with the front man.

Of course the headline of this article is slightly misleading. U2 came no where near Hartford this weekend but he did send a clone, a replicated carrier of message to which we should all listen. The band I’m throwing under the bus is Outernational, a group stemming from New York, New York, and trust me, they deserve to be thrown.
Although the music wasn’t terrible, the lead singer seemed determined to make sure we heard his message, taking an exuberant amount of time to do so. Now, it’s one thing for a famed singer such as Bono to give the crowd a deep, meaningful message. It is quite another thing for a nobody, non-headlining group of New York hipsters to hump us into submission with their garbage.
I’m not against the message. Let that be known. While leaving the venue I heard a red neck republican get into an argument with one of the members of the group over politics, that is not what I am getting at. I don’t care if your liberal, black, Islamic, or Jesus Christ himself, when you get up to play music, just play music and leave the “message” for your autobiography (after your career is long over).