The Truth About "Jennifer’s Body" 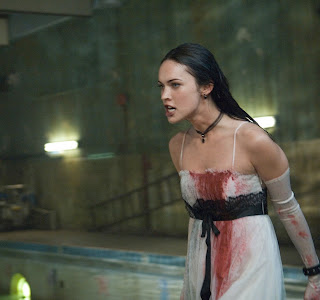 So, what did you think of “Jennifer’s Body?” No really, I need your opinion because I’ve had such a hard time forming my own. Yesterday sitting in my local movie theater I was a little scared, a little interested, and at times, a little bored. There is no doubt that they did an excellent job in shock horror which makes you cringe or jump our of your seat quite a few times.

Director Karyn Kusama did one thing really great. She put her actors into situations in which they could really act. Although many people get on Megan Fox for her ‘idiot girlfriend’ role in the Transformers saga, this is the only time you have seen her. How can you judge a character by her first book? Fox played a terrifying person in the movie and pulled it off pretty well. For her first lead role, I would say she was the best part of the story.
Despite the excellent acting by every member of the cast, the flaw of the movie is in the storyline. To me, the idea of blood sucking sucubuses from hell has been done, time and time again. One of my biggest problems with the story is how Jennifer becomes this blood sucking creature. I won’t ruin it for you but when you go see it your reaction will be “really?”
Comedy is another really subtle attribute to this movie. Writer Diablo Cody, known for her smash hit “Juno” has always done a great job mixing comedy into serious story lines. I’ll never forget almost peeing my pants when Ellen Paige yelled “Thundercats are go” in the teen pregnancy spoof.
The funniest character in the movie is Amanda Syfried’s boyfriend Chip, played by Johnny Simmons. He utters lines like “I can take care of myself, I’ve been using the Bowflex,” giving the movie that slight comedy edge. The mix of terror and comedy makes for a very viewable movie, worthy of your $4-$20 depending on your location. See it for the acting, writing and comedy, don’t see it for the story and plot.