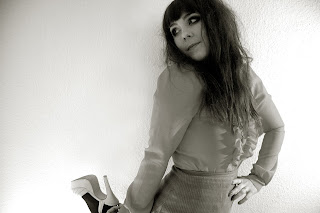 After hearing Miss Li and her song “Bourgeois Shangri-La” I thought it would be fun to find out her reaction to the early success of Apple’s latest marketing campaign. The song which was featured as my song of the week this past week is easily remembered and hummed along to and we discussed her latest album and her plans for a United States appearance in the coming months.

Harris: Up until now, I don’t think many people in the United States had heard your name, could you give us a little background about yourself and your music?

Miss Li: Well..I guess it all started about four years ago when I moved from a small town called Borlänge to the capital city Stockholm. I had been singing before, but when I moved I decided to write music on my own for the first time. I didn’t know how to play piano, but I just decided that I wanted to learn. I bought a piano and started writing. The songs turned out quite ok and I managed to sign a record-deal quite soon and a few months later I released my first album.During that year I was so inspired to write new songs all the time, and I released three albums in eleven months. That was a little bit crazy. But funny!! This album, “Dancing the Whole Way Home” was my fourth album and I wrote it together with the talent Sonny Boy Gustafsson. I felt that I didn’t want to repeat myself and what I had done on the first three albums. I feel that the Miss Li-sound developed with this album and I’m quite pleased with the result!

H: How did Apple approach you about using “Bourgeois Shangri-La” in the iPod Nano Campaign?

Li: They contacted me through my agency. In the beginning I didn’t think that they were going to use it, you know, (I knew) It would be a good thing for me, but I never thought it would actually happen.

H: Do you or did you use Apple products before this?

Li: Well I don’t, but I guess I will now (giving a large smile).

H: In the United States there is a huge amount of buzz around any and all iPod commercials, have you seen an increase in sales and buzz in Sweden since the commercial came out?

Li: I’m on vacation at the moment, but I guess I will notice when I’m back!

H: Are you planning to promote yourself in the United States now that your first song is well known here?

Li: Well maybe. We’ll see what happens now when the commercial is released! I’ve been in the US twice. Me and the band were playing in N.Y and at the House of blues in L.A last year and it would be fun doing a larger tour in the states, maybe in the beginning of next year! But we’ll see what happens! If the Americans want me to come, I’d love to!

H: Did you have any creative input into the ad?

Li: Well, not really. I don’t think it’s common that the artists are involved in the creative parts. We just write the songs, and hopefully someone likes it (again with a large smile).

H: I haven’t heard your latest album yet but what can I expect to hear once I get it?

Li: Well, me and Sonny, that I’m writing together with, are quite into the 60’s. I think you can sense that when you listen to the album! But it’s also inspired by the 40’s. Maybe you’ll hear a little bit of soul and cabaret as well. But in the end it’s produced as modern pop. It’s so hard to explain, but I guess you notice when you listen to it!

H: What is the most embarrassing song on your iPod right now?

Li: (Laughs) I don’t have an iPod, at least not yet, but in my phone I have some songs that are quite embarrassing. For example I like Coldplay, but I don’t really tell any of my friends that I like them, because it’s not that cool.

H: What type of view do folks in Sweden have of American music? Any favorites?

Li: I don’t know. It’s different! Of course there’s people in Sweden that love Britney Spears, Pink and that type of modern music. It seems like America is very into making products right now. The huge record companies don’t really seem to care about releasing good music. They just want to make a lot of money.

But you know, that’s not really music in my ears. If you ask me, I would prefer Bob Dylan, Neil Young and old blues, you know like Robert Johnson, Skip James or Sonny Boy Williamson, or soul from the 60’s like Nelson Sanders, James brown and Otis Redding. And when it comes to new music I love to listen to White Stripes and Yeah Yeah Yeahs.

Here’s the commercial that got things started for Miss Li in America: