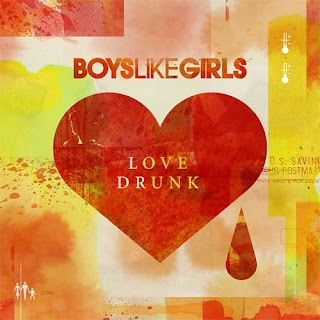 After one of the most remarkable stretches in recent history, Boys Like Girls are finally back with a brand new album. Their 2006 self titled release put out four rock solid singles while helping the group attain an incredible amount of popularity. What made the band unique was the quality of the debut album. Often times, bands will rush into the first album because of early success of a single. “Boys Like Girls” was an album that not only got rave reviews, but was fully embraced by a strong fan base.

Three years later they are back with “Love Drunk” and although the sound has changed slightly, the idea remains the same. Almost every song on the sophomore release has a uniqueness, giving it that single quality. The first two songs are very similar as they provide a slightly more electric sound found more commonly in pop music since 2006. To this point, only two tracks in there was a definite sense that the album could lack an edge. The key change at the end of the self titled single “Love Drunk” is a really great pop move giving this first single the full fledged catchiness.

Track four “”Two Is Better Than One” gives a great sense of the incredible delicate style voice that Martin Johnson showed in songs Like “Thunder” from the debut. This song also features guest vocals by country star Taylor Swift which was a great move for Boys Like Girls. They will quickly open their target up and project onto a huge country audience in the United States.

After the subtle duet with Taylor Swift, “Contagious,” finally brings the edge to an extremely pop sounding album. This was the first song that reminded me of the first album and it was refreshing to hear. This track is another great example of what a band Like Boys Lke Girls brings to the table, although this song will Likely be buried under a slew of singles, it is in a way a self contained single.

In writing about this album it becomes hard to sound repetitive but each song could easily turn into a hit single. “Real Thing” has a tremendous 80’s pop style including classic synth runs. Despite a lack of songs with much relevance to the debut album, Boys Like Girls have done an excellent job recreating their sound so that it is still current. Songs Like “The Shot Heard Round the World” clearly draw inspiration both from their previous works and other modern day pop. Similar to previous songs, this song also draws heavily from a late 70’s or early 80’s pop feel.

The middle and end of the album feature a pretty rigid slow, fast, slow fast mentality when dealing with song selection. Songs Like “Someone Like You” and “The First One” are layered with songs Like “Chemicals Collide.” Speaking of this second to last song, “Chemicals Collide” is another song that reminds me of the bands previous record but really could be a fifth single in a pinch.

The album ends with a really sentimental song called “Go.” Once again showcasing amazing vocals and acoustic guitar it is another in a long line of somber ballads from Boys Like Girls. The production on this record can not be ignored and is really evident in the this slower song. Overall Boys Like Girls ht their mark with their sophomore release “Love Drunk.” Although it will not live up to the high bar set by “Boys Like Girls” this album will make a strong run and continue to grow what is already a dedicated fan base.