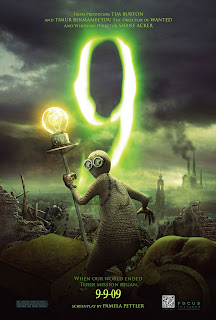 We’ve all seen this plot before. Last man on earth must learn to survive and defeat varied antagonists in hopes of ultimate survival against the odds. Off the top of my head movies such as “Once Upon A Forest,” “I Am Legend,” and “Wall-E,” come to mind. Directed by Shane Acker, the movies producer is of great fame from movies such as “Nightmare Before Christmas,” and “Edward Scissorhands.” Of course I am referring to the legendary Tim Burton and the only reason I would venture out to see “9.”

So, you’ve heard it straight from me, the plot is old and been done many times before. What then could of saved this movie? First, the visual aspect of this movie is stunning. Shot after shot, angle after angle are simply brilliant and it keeps you interested for most of the movie. Also equally great is the use of sound, from the clanking metal sound to the warm touch of a fellow hacky sack, the sounds and score really make the movie shine.
By no means was this Burton’s best work. There was a lack of great dialogue which his movies are known for and although the movie was only about 90-minutes long, any longer and I may of lost interest. Despite the negative notion, I did enjoy the movie and would recommend seeing it. If you enjoyed “Wall-E,” you will enjoy “9″ as it slips into a slightly darker realm of the earth.