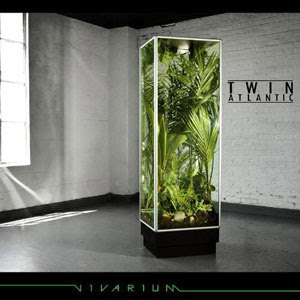 About two months ago a song came scrolling across my email. I downloaded and listened to it and was blown away with every part of it. The vocals were unique, the production was flawless and the band had a great sound. After looking into the matter I found it that the band was Twin Atlantic and their album “Vivarium” comes out today.

As debut records go this one is really solid. Leading off with the single I heard titled “Lightspeed,” it is followed by eight more that really make this band jump off the page. Track two and three pack an amazing amount of power and show off lead singer Sam McTrusty’s vocals (that’s actually his name and his Scottish accent comes across perfectly on the record). The tracks in question are “Old Grey Face” and “Human After All.”
What comes through in the bands sound is a great sense of a live atmosphere. Listening to the album with your eyes closed gives you this amazing impression of what a live show would be like. Some bands have that really tight studio sound (a la Taking Back Sunday) and some bands have a loose studio sound that comes across great live (a la All Time Low). Although I haven’t experienced the live show yet, I’ve got lofty hopes for this Scottish rock band.
“Vivarium” hits stores today and will also be available on iTunes.