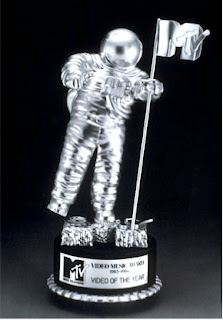 In the hours leading up to the 2009 MTV Video Music Awards there was a lot of hype building. Over the past few years the awards show has played host to a number of strange occurrences, this year was sure to be no different.

As the curtain rose on the famous Radio City Music Hall in New York City, Madonna walked onto the stage and gave a eulogy to the late Michael Jackson. In a truly heart felt moment she recalled their previous encounters and the parallels in the two pop stars lives. As she closed, the opening to “Thriller,” began to play as dancers came out and gave a visual tribute to Jackson. Janet Jackson finally emerged singing and dancing along in a solemn tribute to her brother. The sequence was a great way to honor a man who gave so much to music, dance and music videos.

Russell Brand finally appeared behind Joe Perry and Katy Perry who gave their rendition of Queens “We Will Rock You.” Brand who was hosting the show for the second time got very witty, and very English, very fast. He rambled through jokes that most of the people in attendance didn’t understand but it didn’t matter, he’s Russell Brand.

This awards show more than any other is dominated by performances. We saw Lady Gaga, Green Day, Muse and 3OH!3 to name a few. Pink sang her smash single “Sober” hanging 100 feet above the stage on a trapeze and Beyonce performed “Single Ladies,” recreating the glamor of her music video. Winners from the night included the aforementioned Green Day along with T.I. (currently in prison), Britney Spears (currently on tour) and Eminem (in attendance). There was a general sense of letdown in the air regarding weird moments at the VMA’s until Taylor Swift’s name was called.

Swift was awarded the award for “Best Female Video” and came on stage in a gorgeous silver dress to accept her award. As she began to talk Kanye West jumped on stage from the audience and stated “Yo Taylor, I’m really happy for you, I’ll let you finish, but Beyonce had one of the best videos of all time…” The look of sheer terror on Beyonce’s face was amazing and West was quickly removed from the building by security.

This controversial statement sent shockwaves throughout the pop world. Of note, Pink responded on Twitter with “Kanye west is the biggest piece of shit on earth. Quote me.” As other stars and fans responded it was clear that this was the story that stole the show. According to people inside Radio City the boos were deafening when West’s nomination for “Music Video of the Year” was read.

Luckily the night was saved by the true hero. Beyonce won the award for “Music Video of the Year” for her song “Single Ladies” and as she came up to accept her award she called Taylor Swift back on stage (now sporting a red dress from her performance) to properly thank her fans. In the classiest move I’ve seen in a long time, Beyonce turned the night around with a true act of kindness.

After being removed from the venue, West posted an apology on his blog. The apology which was insincere to say the least was quickly removed just minutes after it was posted, before an edited version surfaced later that night. It is clear that publicists around the world are cringing at this situation.

The night ended with an incredible performance by two hall of fame caliber pop stars, Jay-Z and Alicia Keys. Together they performed “Empire State of Mind” from Jay’s newest album “The Blueprint 3.” Just two days earlier on September 11th they were joined by Rihanna, Mary J. Blige and his wife Beyonce at Madison Square garden and did a great job paying tribute to the city.

The Music Video Awards ended on a bitter sweet note as audience members viewed a trailer for Michael Jacksons movie “This Is It.” The movie will showcase the final days of Jacksons life as he prepared to play a string of shows in London. Overall the show was very successful despite West’s attempt to bring chaos to New York. The MTV Music Video Awards are known for the antics that surround the stage and this years was no different.