Harris’ Album of the Month: Shaka Rock by JET 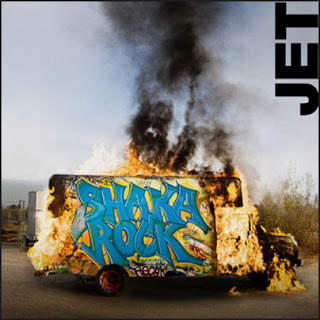 This months album is a brand new one that has been all over my radar over the past week. After achieving platinum status on their last two albums in Australia (their home country) and “Get Born,” going platinum in the United States, the band hopes “Shaka Rock,” will put them back on top. A few things scared me right off the bat with this one. First, they had a song called “Times Like This,” which I quickly confused with a classic Foo Fighters song. Beyond that the albums first single “Genius,” didn’t quite do it for me although there was potential for it to fit perfectly into an album.

Thankfully I was right. “Genius,” fits perfectly right after “K.I.A,” and “Beat On Repeat,” at the start of this album. That grouping really hooked me into hearing the album out. Those three songs do a fantastic job of sinking their musical teeth right into your ears. As a former drum line percussionist I love the tight snare drum playing at the opening of “K.I.A.” and luckily as you move through the album it doesn’t slow down at all. One thing that I noticed is a lack of the ‘sweet’ sound I remember from the last album “Shine On.” If you want a comparison listen to the title song from the last album and try to find anything on this album that is reminiscent of that.

Regardless the album ends with four really solid songs. “Times Like this,” which luckily is not a cover but a solid original that hits hard like the rest of this album. “Let Me Out,” and “Start The Show,” also have this big act feeling. There is no question that they wanted it big and wanted no part of slowing down into a ballad. Finally the last song on the album slows down a bit although the soft sweet vocals are still not present. “Grudge,” is a really fitting way to close out the bands first release on EMI. Each of their releases has been backed by a different label with Atlantic (“Shine On”) and Elektra (“Get Born”) supporting the last two respectively.