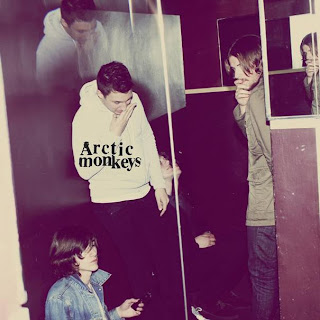 With the last new music report of the summer months comes one of the most anticipated albums of the summer (if your into british pop). The Arctic Monkeys will release “Humbug,” their third album after a highly successful stint promoting “My Favourite Worst Nightmare,” for the past two years. The best of their two previous releases was the afore mentioned album and this gives me hope that this album will be another step forward for this band from the United Kingdom.

Another band set to release their third studio album are Aussie rockers JET. Their latest album “Shaka Rock,” will hope to catch fire similar to their debut album “Get Born,” and the hit single “Are You Gonna Be My Girl.” The first single from “Shaka Rock,” “She’s A Genius,” has shown some promise as it begins to appear on rock charts.
This week also features a new release from the Georgia based Collective Soul. Best known for their 90′s hits which included “December,” “Heavy,” and “Shine,” the band will now release it’s 8th studio album and it’s first under Roadrunner Records. All the bands previous releases came during their run on Atlantic or EI Music. Since departing Atlantic Records after the 2000 release of “Blender,” which went gold they have not achieved that status on another record. I am interested to see what this group can bring to the table after 16 years in business.
Also out this week is a new album from Ingrid Michealson titled “Everybody.” Ingrid has never gotten through to me. Each time I hear a song I am pushed farther away from enjoying this singer/songwriters unique style. The only other thing on my radar is a new release from The Casualties titled “We Are All We Have.” For those of you who have not heard of this band, they are a New York City based punk band that dates back to 1980. The new album will be the bands first release since 2006 as they continue to reach their aging punk audience.

If none of that sparks your interest here are a few other albums out today:
Colbie Calliat releases “Breakthrough”
Mew releases “No More Stories”
Dolores O’Riordan releases “No Baggage”
Victims of Circumstance release “Roll The Dice”