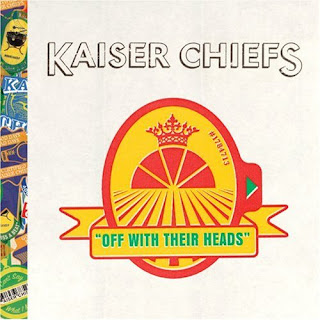 If the Kaiser Chiefs are ever going to make it big this might be there big chance. How many times in their future do you suppose they will be opening for the largest band in America, playing sold out shows night after night? Although I was not thrilled with their latest album “Off With Their Heads,” which was released in October of 2008, there are a few (not so hidden) gems on the album.

This weeks song of the week has some real potential especially if it were picked up by network television and thrust into the limelight. It has that “indie rock” quality that made MGMT’s “Time to Pretend,” a huge hit. In a sense it would be a case of indie miss song gone mainstream hit. It is interested to me that when you have a middle of the road band (not great but not terrible) the singles are almost always the best songs on the album. Great bands release singles to please the masses but critics and fans alike can always dig up the truly great songs on the album. This album falls under the middle of the road category because “Never Miss A Beat,” (the first single) and “Good Days Bad Days,” are the two best songs on the album.

Back in 2007 the Chiefs released “Your Truly, Angry Mob,” which had a really strong first half, generating a number of solid songs. The current release is a much weaker attempt by the band but the fact that Green Day picked them up as the opener on the “21st Century Breakdown Tour,” means that each night they are in front of tens-of-thousands of screaming potential fans. Hopefully they work their british magic and stick around a few more years.