The Truth About "Funny People" 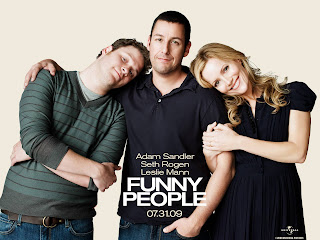 Last night amongst many personal dramas occurring over my summer vacation I found some time to go see one of the more highly anticipated comedies of this summer. “Funny People,” which stars Adam Sandler alongside Seth Rogen is a really solid example of where comedy was in the 90′s and where it has come. In a way this movie closes a full circle for Sandler who gave one of the best performances of his acting career. Although it was not based on true events, there is some reality to “Funny People.” The character Sandler plays has a past very similar to the real life actors. He began as a stand up comic and in his later years played meaningless roles that do nothing but make people with a toddlers comedy sense laugh.

“Funny People,” a movie that was not only touched by the golden hands of Judd Apatow, but starred a slew of comedy greats including Andy Dick, Dave Attell, Sarah Silverman and Ray Ramano. Also making a pretty shocking appearance is Eminem who spends most of his time on screen yelling at Seth Rogen in a very funny altercation. The movie itself is an emotional roller-coaster that takes you through the most difficult part of life; death. Half bromance and half romance this movie also stars Jonah Hill (who I wish had more screen time as he was hilarious in his brief time on screen) and Leslie Mann (also Mrs. Judd Apatow).
One of the big hits of this movie will never be known until the DVD is released. This is one of those laugh out loud (LOL) movies in which you miss a lot of subtle jokes that get slipped in amongst the crowds laughs. “I think in China you’re not allowed to have two daughters,” whispers Seth Rogen after a slew of Asian based jokes. Most people didn’t even catch it as I was among the only people laughing at the joke. One of my favorite jokes of the whole movie comes from Eric Bana who sells useless products to Asian countries. When talking about Korea he says that they would “blow you for a Wii Fit,” which is just such a blunt statement it’s hilarious.
Many people disagree saying that the movie is long, not funny and in a way, depressing. Although there is some truth to this in that it could of been about thirty-five minutes shorter, the movie had a lot of closure for me and in a way was the perfect length. Apatow and Sandler have teamed up with a slew of great modern day comedians to make a movie that is a true hit and hopefully not to close to the reality of where Sandlers career is going. In a way this movie shows the passing of the torch from Sandler to both Rogen and Hill who are the Facebook generations comedy heroes.