Harris’ Album of the Month: Underclass Hero by Sum 41 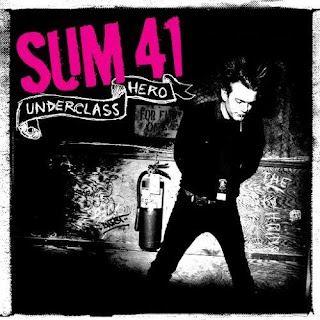 This month I draw your attention to an album that was passed over by fans and critics alike. Everyone will remember Sum 41 for their early 2000′s hits “Fat Lip,” and “In too Deep,” both from the 2001 release “All Killer No Filler.” After the album that made them a household name they released two more albums in 2002 and 2004 both of which weakened the bands public demand and caused the 2007 release of “Underclass Hero,” to go unnoticed.

The album itself is truly great. Leading off with the title track “Underclass Hero,” is a true old school Sum 41 song. When you hear it you think to yourself that it could of been on “All Killer No Filler,” and that makes the song special. From there they mix the new aged “overproduction,” style made popular by the likes of Green Day among others, with that old school sound that made them popular at the turn of the millennium. “Count Your Blessings,” and “March of the Dogs,” are two anchor songs right in the middle of the album that are awesome head banging new aged punk songs.
As I always write, great albums are made in the latter stages. So many albums have a great first half and then trail off during the second half. This album stays strong into the second half with one of the best songs on the album being “Confusion and Frustration in Modern Times,” which is followed by one of the better slow paced songs “So Long Goodbye.” This album which was passed over my almost everyone should really be given a second look and is my album of the month for August 2009.
Track Listing
Underclass Hero
Walking Disaster
Speak of the Devil
Dear Father
Count Your Blessings
Ma Poubelle
March of the Dogs
The Jester
With Me
Pull the Curtain
King of Contradiction
Best of Me
Confusion and Frustration in Modern Times
So Long Goodbye