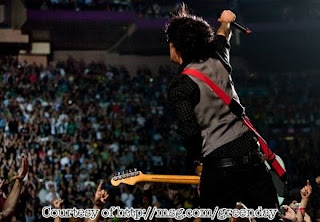 As I have become more entrenched in the music world it only seems natural that more music passes through my ears and I attend more concerts each year. Me and a close friend had the discussion a while back that we were becoming numb to concerts. Luckily I found out last night that this was not true. It might be that I have become numb to the run of the mill cookie cutter shows that crowd nightclubs and holes in the wall alike but on this night I would be touched by one of the first bands I ever listened to.

Green Day are no longer the band of the 90’s. Instead the band (with help from “American Idiot”) have become the representative band for anyone born from 1985 until now. After a solid set from british rock group the Kaiser Chiefs the lights dropped Madison Square Garden into complete darkness and the voice of Billie Joe Armstrong was heard blaring over the speakers. “Sing us a song of the century, louder than bombs and eternity…sing us a song for me,” and with that an all out assault on the senses had begun. Opening with songs from their latest album “21st Century Breakdown,” the band played in front of a huge set which included a skyline of a large city. 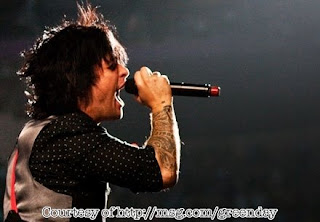 The first glimmer into the past came as the band played the first few chords of “Holiday,” one the huge singles from “American Idiot.” A theme of the night was crowd participation as a number of random fans were dragged onstage to either perform or be serenaded by the group. Billie Joe also took sometime to run into the upper deck of The Garden through the crowd being chased by his security. It was cool off the cuff moments like this that made the venue seem small and gave this band a true personality as opposed to robots on a stage.

Old school Green Day fans really appreciated the middle of the show in which the band played old singles such as “When I Come Around,” “Welcome to Paradise,” and “Basket Case.” Surprisingly they also pulled of an updated version of “2000 Light Years Away, a song from their 1992 album “Kerplunk.” It is interesting to me that as the bands catalog of songs grows, they are able to play less and less from each album. The band left off singles from “Nimrod,” and “Insomniac,” but did a fantastic job of mixing old school and new album material. 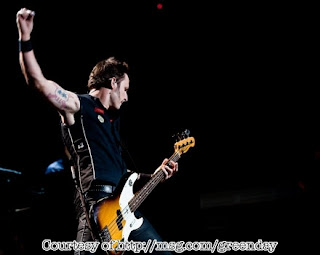 Production is not a term you think of a lot when watching a concert, except when Green Day is on the stage. Everything from the pyrotechnics to the videos behind the band were perfectly executed and almost unmatched to date by any band I’ve see. The show ended with the band performing “American Eulogy,” which became my favorite song on the album with this performance. The list of songs that were left un-played as the encore began was long and I doubted how many they were actually be able to play.

They came out to “American Idiot,” quickly followed by “Jesus of Suburbia,” which was performed by an audience member who did actually know the entire eight minute song. This was followed by “Minority,” just before Billie grabbed an acoustic guitar, ran out to the middle of the audience and played “Last Night on Earth,” followed closely by “Good Riddance.” With that, Billie Joe took a bow as Tre Cool ran out on stage and threw about twenty drum sticks into the crowd. The show which was full of crowd stage dives, cursing and amazing music had come to an end but there was an energy that surrounded the crowd that was incredible. With a flick of his wrists or a lifting of Mike Dirnts bass the crowd would scream or throw their hands up on cue. I have never seen a band take complete control of an audience and hold their attention for such a long time like Billie and the boys did on that July night.

All of the pictures shown in this article were courtesy of MSG.com. To see more pictures from the night click here!!