Anyone who knows anything about Reel Big Fish knows that in the past five years or so it would be rare to see them perform live without hearing Streetlight Manifesto just before them. 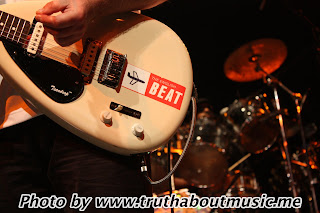 The two bands have shared numerous tours and I have personally seen the two team up about eight times. You can imagine my surprise when I saw that Streetlight would be on Warped Tour and Reel Big Fish would be touring with two bands I had not heard before; The English Beat and The Supervillains.

In typical form, I did no research into the openers and decided to form my opinion of them live, in person at Nokia Theater. The Supervillains took the stage first and demonstrated early their interesting mix between reggae jams and fast paced Streetlight style ska. Although I am impartial (I am the rare ska fan that does not enjoy reggae) I enjoyed the bands fast songs much more than the slow reggae songs. 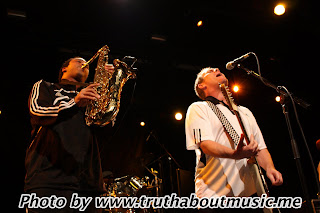 The crowd seemed to of been on my wave length as they stood around for the jams and went crazy for the faster songs. Interesting to note that the lead singer for The Supervillians resides behind the drum set, something rare but interesting in today’s world of front men. The winning chord for me came as the band belted out a cover of Billy Joel’s “Movin’ Out,” which was actually done really well.

Second on the bill was The English Beat and after a brief conversation with some die hard fans at the front of the stage I was confused. They said that I would be confused at first but then really enjoy it. I must give them credit because they hit the nail right on the head. The band came out, led by the 53 year old Dave Wakeling who sports one of the coolest guitars I have seen in a while (see picture). Despite having seven members the band moved around the stage with an energy that is lost in today’s world of ska. After the show I was trying to describe the bands sound and all I could think of was 1970′s disco and funk mixed with two-tone ska. An interesting mix to say the least that peaked with the cover of The Staple Singers #1 hit “I’ll Take You There.” 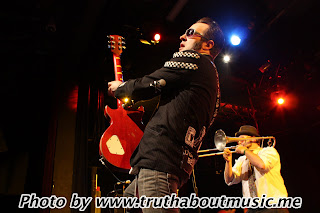 At last it was time for the kings of the genre to take the stage. No band has done more touring, sold more albums or helped to recreate the east coast ska scene than Reel Big Fish over the past 17 years. This night would be no different as the lights dimmed and the crowd went crazy to an assault of songs both new and old. Aaron Barrett is truly one of the great band leaders in all of music, with an uncanny ability to play guitar, dance, sing and play with both the crowd and his fellow band mates often all at the same time.

Opening with a classic closing song the assault began with “Take on Me,” the Aha cover from the 90′s. The set continued along including songs such as “The Fire,” “Brown Eyed Girl,” and “Snoop Dog, Baby.” Despite having to make two seperate attempts at completing the first song, the show continued along with the crowds energy 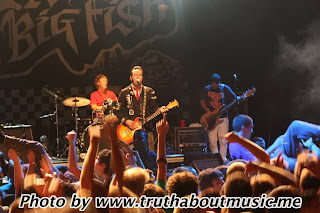 level peaking towards the end as the band rolled into the cover “Nothin But a Good Time,” before finally closing the show with “Sell Out.” For someone who has seen this band quite a number of times over the years, it’s always nice to see them at an enjoyable venue and as I wrote about that night Nokia is one of the best.