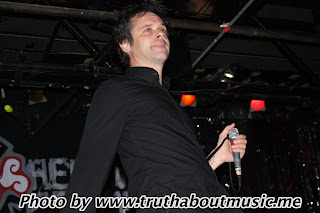 Back on May 10th, 2009 I ventured out to the Crazy Donkey in Farmingdale, New York on one of the first truly hot summer days of the year. I found Greg a few hours before doors out behind the venue hanging out with some of the opening bands. With planes flying low over our heads and asphalt burning under our feet Greg leaned up against a 90′s era sedan and talked about life 20 years since The Bouncing Souls began recording.

Harris Decker: Could you give me a very brief history of the band from your point of view?

Greg Attonito: We were like any high school band, just some friends who were looking for something to do that wasn’t the typical deal, we were into music and were just goofball creative types and we just kept going with it and we just didn’t stop. We had enough success and enough drive and blind determination to just keep going after we finished high school.

HD: I was hoping you could give me a brief overview of the New Jersey punk scene and how you feel you fit into it?

GA: I wouldn’t say I’m too knowledgeable as to what’s going on in New Jersey besides for the Asbury Park Lanes, I’m there now and then, it’s where we’ve been recording and they have a great thing going on there, it’s a steady venue, it’s small enough for like constant touring acts to keep coming through, your going to get a good thing going on. It’s going well, we just celebrated their fifth birthday last night so it’s pretty perfect to mention that. Aside from that it just seems like theirs a lot of bands coming out of New Jersey right now, there always have been but it seems like there’s a lot now more than ever. It’s just doing pretty well.

HD: Do you ever have different emotions when you are playing a venue that you have played a lot or a home town venue like Asbury?

GA: Absolutely, it’s different in every environment and every city and the local. Long Island has it’s own vibe, we played in Lancaster a few days ago at a place called the Chameleon Club and it’s a place that’s been there forever, like when we first started out in the mid 90’s I saw Social Distortion out there and we were like whoa this place is cool and it’s big and then we started playing there. So there are places like that and playing LA was always cool because when we first went to LA it was a big deal in it’s own way. Then playing in Jersey and Asbury Park has it’s own special friend a family vibe to it. They all are different like that. 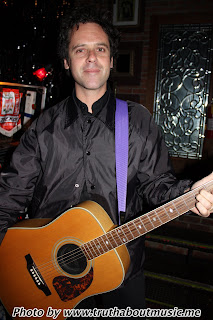 HD: What is the band songwriting process, is it collaborative or is it a one man show?

GA: It’s totally collaborative, there isn’t a real science to it, for example I’ll come up with some lyrics and the guys will come up with some music and we’ll try to see if they go together and we’ll play around with it a little bit. Then maybe we’ll record something and it will be just a little piece of something and then someone else will throw some lyrics into the mix and I’ll try to sing it. Maybe I’ll pick up a guitar but it’s just this big pot and in the end it’s just a full mixture of soup. Everyone has a real emotional input into each song and that’s how everybody feels.

HD: Bands these days are connecting with fans in so many different ways, have you jumped on the Twitter bandwagon yet?

GA: When I get home I’m actually going to check it out, I’m going home in a day or two and I’m going to start doing it because everyones doing it and just sorta started steadily doing blogs on Myspace and now it’s like Twitter and Facebook and we’re probably going to start doing that too because it’s what everyone goes to look and see what your up to so as a band while we’re touring we have to figure it out and do it.

HD: Whether it’s a fellow punk band or any young band sitting where you were 20 years ago, what advice would you give them today?

GA: Well it’s a different world and I don’t want to be discouraging but there’s just a lot more bands than there were then. Yes, you do have the internet and you have access to people seeing you all over the world like that (as Greg snaps) which we didn’t then. But at the same time there were advantages to that back then and there’s more advantages to how it is now. All that stuff we can measure up and be like this is that and yesterday was like that and today’s like today but in the end it breaks down to just doing it for the adventure and the joy of it. If your doing that you can’t loose. You go on a tour and you bust your ass you make no money and nobody shows up, you went out and you did it for the experience you can’t loose. If your really invested in becoming a successful musician that is going to make a ton of money give me a call when you figure out how to do that because there’s very few of us. I’ve made a living out of it to a point where I pay my rent and pay my bills. That is a complete success as a musician on some levels that some people only dream of having and I barely pay my bills. It all depends on how you look at it and it’s hard work and that hard work never goes away and it’s a 24 hour job. It’s a passion and sometimes your like dude, working at 7-Eleven would be pretty simple. I go early in the morning and I leave at three and I go home, I don’t give a shit about 7-Eleven, there’s advantages to both in some ways.

HD: Do you have any memorable tours or shows that come to mind from the past 20 years?

GA: There’s been a bunch of cool stuff that we’ve done, the True Believers Tour was just a great tour and the Warped Tour overall has just been a cool experience and all the people we’ve met, it’s like an extended family. We’ve played in Japan, we’ve played in Australia and at Wembley Arena with Green Day. Those are just some highlights and things that were really really cool.

HD: Do you have a wish-list of bands you want to play with before it’s all over?

GA: I swear to god, as far as those things it’s already completely surpassed my expectations.

HD: So your there already.

HD: This is a popular fan question, if we were to look at the most played songs on your iPod right now, what artists and songs would we see?

GA: I just dig into classic stuff constantly, I’ve been listening to Bill Withers and in our new house we finally got the record player going so I’m starting to buy vinyls more and get that all organized. I want to get some Bil Withers on vinyl. There’s a lot of blues on my iPod, just a whole lotta blues. I just did a tour with Vic Ruggiero (of The Slackers) and Shanti (Shanti Wintergate, Greg’s Wife) and her music is totally amazing so check it out, her solo stuff and Vic’s music is awesome. Now I know his solo stuff a lot more from The Slackers and it’s really really cool.

HD: Do you have any upcoming Bouncing Souls releases that you can share with us today?

GA: With our 20 year anniversary we’ve done a whole lot of new music and it’s really good so we’re putting it out the first of every month, song by song and then at the end of the year we’re going to put it out on a CD and I’m also working on some solo stuff that will probably come out next year along with some more touring.

HD: Thanks, that’s all I have for you.

GA: Appreciate it, thanks.