Harris’ Album of the Month: The Tranformers Movie Soundtrack (1986) 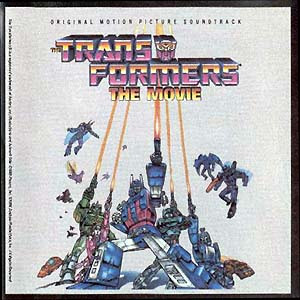 Although I’m a few days late I think this months album of the month is truly a diamond in the rough. Back in 1986 very few things were as celebrated as The Transformers. The television show had been a huge success and with everything from toys to snacks, robots were taking over the world. It was only a matter of time before these robots would meet the big screen in cartoon form. For those of you who do not know, I am not talking about the 2007 or 2009 movies but instead the original cartoon movie.

Enough about the movie. The thing I am here to discuss is my album of the month which is the soundtrack from this class 80′s film. As with a lot of other music from this time period many of the songs are synthesized and feature screeching vocals, providing a good mix of classic rock and synth rock. Among the artists featured on this album are Stan Bush, Spectre General, N.R.G. and Weird Al Yankovic.

This mix of styles shines through brilliantly as these songs seem to fit perfectly into the movie and really showcase 80′s rock and why it kicks ass. The theme song for The Transformers was recorded for the album by Lion and is the best version I’ve heard to date of the classic theme. If you really want to bring back the 80′s and embrace your inner robot, check out this album and be sure to let me know what you think.