My Mistake, There Really Was Something Good To Listen to This Week: NeverShoutNever! 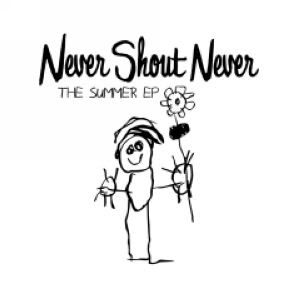 In my post yesterday I was ranting about the lack of new things to listen to on a rainy Tuesday in June. Although I stand by what I said, I left off a really great little EP that was released yesterday by Christopher Drew, better known to fans as NeverShoutNever. “The Summer EP,” was released yesterday and true to it’s name it is a true winner, especially for summer.

From the very beginning this group has an amazing ability to spread generations. When I first played this EP for my mom while driving to work one day she said “who likes this music?” I had just finished explaining that NeverShoutNever has a demographic similar to bands like Cobra Starship and All Time Low (aka 13-16 year olds, mostly girls). She continued, saying that she actually like the music and I can understand this. Drew’s music really does a great job of being intelligent and pop driven all at the same time.

“Happy,” and “Hummingbird,” the first two songs on the EP are very slow and dramatic, highlighting some incredible production and Drew’s fantastic voice. “I Just Laugh,” takes the tempo up a little bit with a very pop rock driven melody. In these three songs you can really hear the different sides of NeverShoutNever. My favorite song on the EP is the shortest but sweetest. “On the Bright Side,” really shows off Drew’s voice and his guitar playing all at the same time. There is very little production in the song so the star that is Christopher Drew stands dead center in your headphones.

Overall Drew did a great job putting together a small EP perfect for long humid summer nights and bright days at the beach. Check it out because really there is nothing else to listen to this week.