When I was told that CAKE would be performing in Hartford excitement was the only word I could use. A few weeks later I found out that on top of not bringing an opening act with them, the show would include a short intermission. In my head I thought that I should be seated in an elegant theater and not at a rock show. It was the first time I had ever seen a band do this and it was pretty sweet way to watch a show. 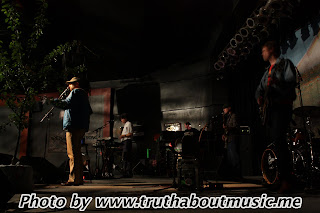 Despite an overuse of the vibra-slap and the disco ball, the crowd seemed mesmerized by CAKE’s five members and their music. After a short musical prelude, the band opened the show with “Short Skirt/Long Jacket,” which has become extremely popular over the past few years especially with it’s appearance on NBC’s show “Chuck.” The band raced through other fan favorites such as “Comfort Eagle,” and “Rock ‘n’ Roll Lifestyle.”

Towards the end of their first set they surveyed the crowd looking for someone who knew the identity of the tree standing on stage with them. The person who was able to determine the tree was an apple tree was asked to take the tree home and plant it. Vince, trumpet player for CAKE told me earlier in the month that if he had any advice for new bands it would be to “go out on a limb.” To me this was made so clear as they gave this tree away as part of their extremely “green,” show.

The second set included a number of popular songs and although the crowd was pretty static throughout the night they found the energy to dance at times. My favorite CAKE song and also the first one I ever heard was “Sheep Go to Heaven,” so when lead singer John McCrea began the introduction on his acoustic guitar I was in goat heaven. 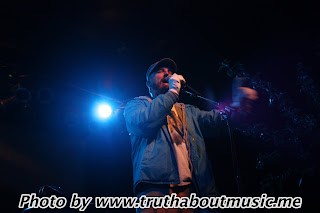 As the show ended we knew an encore was sure to come. “The Distance,” one of the bands most popular songs had gone untouched and with the crowd getting anxious the band emerged to play three more songs. After their awesome cover of Black Sabbaths “War Pigs,” they finally thanked the crowd as John clutched the microphone and sang “reluctantly crouched at the starting line,” the opening line of “The Distance.”

Overall the show was a really good time despite a general lack of movement amongst the crowd. There were quite a few vibra-slaps that made their way into the crowd adding to it’s slight overuse. The unique sound created by CAKE described by Vince as “Willie Nelson and Sly and the Family Stone are at a party and they play AC/DC records backwards,” was well replicated in their live show. The only song missing from the bands show was their famous rendition of “I Will Survive,” but thats the beauty of a live show, you never know what your going to get.