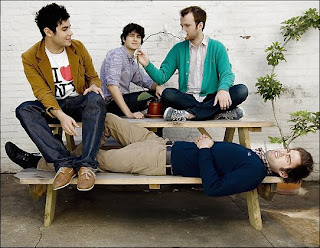 Interview with Ezra from Vampire Weekend

Interviewed by Harris Decker from The Truth About Music

Harris: Does the band come up with the ideas for your creative music videos or is it a collaboration with the director?

Ezra Koenig: It‘s been both for the different videos. Our first video that we made which is kind of like, you know, our cheapest, simplest one for Mansard Roof we almost made ourselves. We collaborated with a friend and we didn’t have much of an idea. We just jumped on somebody’s boat and took this old camera. But for the A Punk video that concept was almost entirely created by the directors, Hammer and Tongs. I mean I communicated with them earlier with these kind of ideas about color and atmosphere but they cam up with that. And then for the last two that we’ve done with the director Richard Ayoade; that was pretty collaborative too. And he’s directed videos for Arctic Monkeys and he’s worked on British television so he has a lot of experience. So we came up with like very, you know, we came with small ideas like maybe the camera’s moving all the time, maybe it takes place in this kind of world and then we would go back and forth.So it’s been a mixture and, you know, we like collaborating with directors but we also like when they’re their own ideas.

Harris: You all have so many different styles in your music, everything from classical, opera, and pop. How did you all incorporate that all and collaborate it without it clashing together? Was it natural or did it really take hard work and time to make it work?

Ezra: I think for us it was pretty natural. I mean we all kind of grew up listening to so many styles of music it made sense to put it together. But at the same time I think sometimes, you know, you get an idea that two things would sound good together but really it just doesn’t work. So whenever we felt like something felt awkward or forced we wouldn’t really pursue it. We would only kind of go ahead with the ideas that made natural sense so a lot of our songs came together very quickly.

Harris: I just recently heard an awesome remix of “Cape Cod Kwassa Kwassa” online. What do you guys think in general when people remix your music?

Ezra: Well, a lot of them have been done without permission. We’ve been very careful only to let people that we really admire do official remixes. But it’s always cool to hear unofficial ones too. I’m really excited about the (Chromio) remix of The Kids Don’t Stand a Chance that’s going to come out I think next week and because I’ve known those guys for a while and I really am a huge fan of them but yeah, I’ve actually met him and I collaborated with him on a song for his album and so he’s a really cool guy. He lives in London and he was born in Malawi and he’s making this really great record with these producers called (Radio Clip) and to hear his take on that song I think is awesome. So that’s actually an official remix. We like talked about it with them and I reckon they will put it out. Yeah, like that one a lot too.

Harris: So much has changed for you in such a short period of time. How do you feel coming all this way, getting so big so fast?

Ezra: Well, I mean you’re right. A lot’s changed since the beginning of the year for us it’s kind of hard to have perspective on it because, you know, since we did that show in Ohio we’ve kind of been on tour nonstop. Actually I’ve been home so little, I spend all of my time traveling and performing. And, you know, we notice differences of course. The shows get bigger and people know the words more but it’s still a little bit hard to fully comprehend it. But I can definitely say that I’ve been very happy in the way that our audience has grown and not from a numerical standpoint; just that the type of people who come to shows you definitely get people who are in no way the kind of old images of like an Indie rock listener. You know, we get people who probably are extremely mainstream, we get people who are in their 50s and 60s sometimes, like little kids and it’s all across the board. So I’ve been happy to see how the audience has changed in that way.

Harris: I recently read somewhere that you got a chance to perform with Crosby and Nash and I just am wondering how was that experience for you?

Ezra: Well, that was really great and surprising. I mean we were doing this rally for a Music for Democracy organization and we knew that Crosby and Nash were going to be there but we didn’t know how involved they would be and they turned out to be super nice. They came backstage and they asked us if we would sing with them and they like brought us out backstage and invited us. It was, I mean obviously we kind of grew up listening to them and so to meet them and perform that song again was a nice experience. And it’s cool to see that these guys who kind of came out of, you know such a unique era of the 60s, they’re still very politically active and still using their music as a force for good. So yeah, it was a very cool experience.

Harris: Hey Ezra, thanks so much for taking the time to answer a few questions for us.

Ezra: All right. Yeah, good talking to you.