Sing It Loud Tear the Roof Off Webster Theater 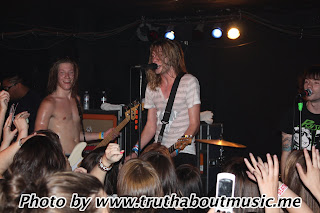 Since the very beginning of Sing It Loud’s existence, I have been listening to them. They had a single of the week on iTunes which got me hooked and ever since I have wanted to see them live. One thing lead to another and it has been nearly a year of me just missing them or not being able to make it to a show. That finally changed last night at the Webster Underground.

A nearly sold out show was the setting for what would be one of the most energetic performances I’ve seen in a long time. It is nice to see that a band like this knows what they need to do each and every night. Their goal is to win over each and every member of the audience as they build a strong fan base. The fans in the crowd were not disappointed.

Opening with “I’ve Got a Feeling,” the first track off of their debut album “Come Around,” they hit the stage with an awesome energy that drove everyone crazy. I squeezed my way up to the front to snap a few pictures before getting out of there. The band spent most of the show just inches from the crowd, something that doesn’t happen in larger venues. The great thing to me was that although the band was right on top of the crowd and jumping all over the stage their sound was really tight.

Hitting songs like “Don’t Save Me,” and “Over You,” along the way, their set progressed until the biggest song “Come Around,” was played very last in the set. The crowd seemed really into the show the entire time as the band had no trouble holding their attention. During “Come Around,” bassist Nate Flynn put down his base and leaped head first into the crowd. He was caught by the crowd and spent the last few seconds of the set crowd surfing before being returned to the stage.

Overall Sing It Loud brings a rare combination of killer stage presence and fantastic musicianship. I think the hardest part of their performance was fitting all five members of the group on the tiny stage at the same time. Either way all of the audience members had a great time, sticking around after the set to buy merchandise and have it signed while taking pictures with the band.