Indie Is Not A Real Genre!! 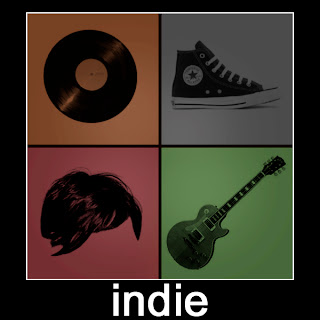 Here it is, I’m going to say it once and for all; Indie Is Not A Real Genre!! I know many of you might be saying, why Harris, why isn’t it a real genre or why don’t you have any respect for the music these musicians create? The point is I do care, I just have no respect for the “indie” label (from now on “indie” will be in quotes because for the purposes of this article “indie” is a figment of all of our imaginations). People have tried to explain to me the label in three different ways and they are as follows:

I can very easily go through each of these examples, explaining why the genre is dead, and why being an “indie” musician is really not a real thing anymore. Starting with the more abstract, number three involves the attitude “indie” musicians encompass. There is something about the pretentious way they look at music that makes me want to stab them with a Hofner bass. Any music that they (or their closest friends) did not write is looked at as being “under them.” They lend no respect what so ever to the pop music world, and it is this mindset that leads to their ultimate failure. It is a given that if you do not make money (even just enough to cover expenses), you will not survive as a musician. It is this point that “indie” artists fail to see.

Moving on to the second point. Calling yourself “indie” because of the sounds coming out of your amplifiers, drums, keyboards and PA systems is like saying that all animals are penguins. We know that’s not true, their are many species of animals on this planet and lumping them together wouldn’t make any sense. Why then do I listen to artist after artist, all considering themselves “indie,” who sound nothing alike? If I stroll through my iTunes library and pick a few random songs within a genre, let’s say Classic Rock, the songs will have a relative sound. Of course they won’t all sound exactly the same, but they will each fill a void, a space that they are meant to fill within the bubble of Classic Rock. The fact that “indie” has so many sounds, styles and teachings, further proves my idea that it is a dead genre.

Finally, the talking point I have been waiting for. Number one on my list is the most fundamental of them all. It should be easy to prove if an artist is independent based on the status of that artist and any and all contracts they have signed. Taking a look at who my closest friends consider “indie” artists, bands such as Ra Ra Riot, Black Kids, Cold War Kids, Arctic Monkeys, The Kinks, The Kooks, Sondre Lerche and The Libertines, always seem to come up. Among these “indie” bands, not one of them is independent. They all have recording contracts (most with major labels) and therefore the most basic “indie” principle is thrown out the window. Just in case you were wondering here are the labels some “indie” artists are signed too, many for quite a few years now:

Finally, my favorite example is the final one on the list. MGMT, hailed as one of the best “indie” rock bands of 2008, and thought to be the ultimate Brooklyn based “indie” band, are on the major label circuit just as much as anyone else. Broken up for a few years the band was brought back together by Columbia Records as they were set to nationally release “Oracular Spectacular.”

So there it is in a nut shell. “Indie” the genre we all love to debate, listen to and share with friends is not in fact a genre at all. To all the so called “indie” artists out there, you should probably decide on a real genre before the ship gets to the bottom of the ocean. If you call yourself “indie” pop you should just be taken outside and bludgeoned for not understanding what an oxymoron is. All you other bands that call yourself “indie,” it’s easy, just pick a real genre. If you need help, see number two in the above list, that will help point you to a real genre.

I look forward to extensively debating this topic with you all throughout the week, but I hope that you really take the time to read it, before doing so. Enjoy!