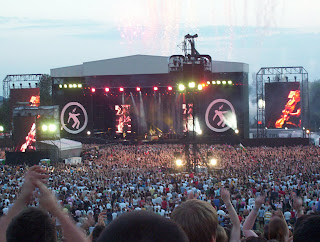 Of course this will cause some controversy but when I refer to a current rock band I simply mean that they are still gaining new fans on an everyday basis. Bands that I leave out of this mix are large scale touring acts that are still riding the wave from their many years of success. Nothing taken away from bands like Bruce Springsteen and AC/DC but there aren’t a lot of people these days sitting down and listening to them for the first time.

Simply put, Green Day is the largest current rock band in the United States. They are still gaining fans and their last release was the largest in their history, and what many critics have called an album to define this century. After Green Day there is a mix of bands that can fall onto the top ten list including but not limited to The Red Hot Chili Peppers, Foo Fighters, Weezer, Fall Out Boy and now, No Doubt.

I am up for debate on this one so let me know who you think are the top current rock bands in the United States. We all know Bruce Springsteen will tour the country forever and always sell out shows, the difference is that each concert is made up of roughly the same crowd, the same cannot be said for Green Day, yet.