Could The Urgency Be 2009’s Breakout Artist? 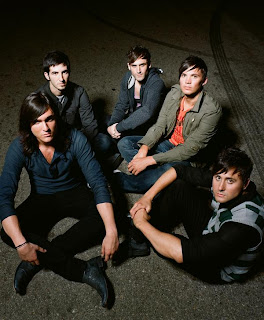 Once and a while I receive an album in the mail that I completely forgot I had requested. I look at it and think, “who the fuck are these guys?” Most of the time the disc spends 6.78 seconds in my computer before it is disposed so that my Macbook Pro won’t cry. This time was different. Track one quickly turned into track ten and I simply could not stop listening.

About two weeks later the play counts all stand around ten which is quite a lot in a library that includes almost 7,000 other songs. The Urgency stem from the northeast portion of the country and in just a few years have begun to make there presence felt.

The sound that this band generates is really intense in the most perfect ways possible. Each and every song is catchy and memorable, making you wanna get up and either dance or rock out hard. Track one “Fingertips,” is a really great example of what this band sounds like. It combines a hard rock verse with a really pop filled chorus.

If I were to guess right now, single number one will be track three, “Rooftops.” This song is perfect for radio play and as I always say, the song is one hit television show away from busting out. The chorus sings “Here on your rooftop, the moment is right,” and this is exactly right for the band.

After a string of really fast songs that get the album moving, “Memories,” is the first song with a real change of pace. Interestingly enough it is not a ballad but instead a really melodic track with a solid downbeat. Another track titled “Stop,” is really dying to be remixed and turned into a club anthem but again brings a new sound into the bands incredible repertoire.

It seems that this band is doing something that many others in the pop genre have not. They are taking the time to really put their album together in a way that makes sense and flows. The instrumentation is creative leaving you wanting more and this really could be that record that turns pop/emo/alternative music into a genre that is respected within the music community.

One of my favorite moments in the album occurs during the opening riff of “Move You,” one of the final four tracks on the album. Lead singer Tyler belches a really cool underlying portion of the riff and you think, “what was that?” It is really effective. Ironically this song is probably the hardest rock song on the album with a subtle amount of screaming towards the end. This screaming is combined with a timbale solo by drummer Guerin. Yes kids, you heard me right, track eight combines screaming, a timbale solo and hard rock.

In a fitting end the album concludes with a really mellow dramatic song called “Lullaby.” Bands that can feel out a song like this are truly special and this is a perfect ending to a perfect album. This self titled debut album will be released on April 21st nationwide as they kick off a mini tour with 311 before performing at Bamboozle and then embarking on an overseas tour with Hollywood Undead and Silverstein.

Although many of you may have no idea who The Urgency are, rest assure that in one year you will, money back guaranteed. To read the full interview of Tyler Gurwicz by The Truth About Music, check out Buzzine.com

The Urgency’s Self Titled Debut Album is in Stores Today, Go Check It Out!! If you live near a Newbury Comics, the album is only $5.99, support music. Also check out YouTube to see the music video for “Fingertips”