The Hip-Hop in My Head 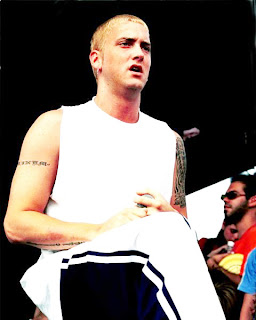 This title could of just as easily been titled songs of the moment but for right now there are two hip-hop songs that I cannot stop listening to. One of them is a few months old and the other is brand spanking new. The older of the songs is Akon’s most recent single “Beautiful.” This song is such an amazing club anthem and is in heavy rotation within that circuit. If I were at a party over the past few weekend this would be the song I would want to hear.

An interesting element to this song is that the full version lasts for just over five minutes. As Billy Joel said “If you’re gonna have a hit, tou gotta make it fit, so they cut it down to 3:05.” It is a rarity for a hip-song to be this long and still receive substantial radio airplay. What really makes this song is the talented Akon and his vocal tracks. Of course they are filled with effects and compression but it is that sound that makes his voice so recognizable and unique.

The newer of the two songs is Eminems latest song “We Made You.” Although Eminems album is not scheduled to come out until the fall it looks like he will be releasing singles all summer. As I have made clear in a previous post, “Crack the Bottle,” (the first single released a month ago) was really not that stunning. There was nothing in in that made me interested in what else is coming.

This song has the opposite affect. As opposed to an odd sequence in which Eminems voice sounded like a small mouses, there is just some straight forward rapping by the lyrical mastermind. The chorus of the song is performed by soul singer Charmagne Tripp, and is truly elegant. This song has wet my pallet for the rest of the album and I really cannot wait for the fall.