For many years bands have made similar noise come out of their instruments. Much of it sounded the same and if you grew up in the 90′s you know this all too well. We all remember 3 Doors Down, Third Eye Blind, The Goo Goo Dolls and Matchbox 20. These among others all grew up with a similar style and to this day very few bands (not from the 90′s) have copied this style. The artist I am introducing you to today hasn’t totally copied this style either, but they come close.

Safetysuit formed by accident in Oklahoma when a few friends decided to enter a talent show and happened to win it. One gig lead to another gig which led to another. Before they knew it the band was signed to Universal and on tour with bands such as 3 Doors Down, Hinder and Hoobastank. As the previous story would have it, the band does draw heavily from their 90′s influences, but mixes in a slightly harder edge making them more fitting in the current times 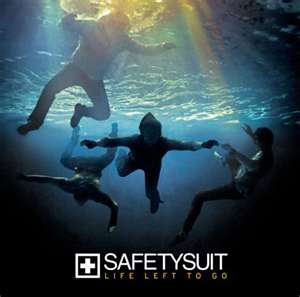 Their breakout album titled “Life Left to Go,” has been in stores for a few weeks now and has been getting some really positive feedback. “It’s a very very cool thing to be able to create music with people that really are truly your closest friends you know,” said Jeremy, the bassist for Safetysuit in a recent interview with Buzzine.

The album itself is a really nice collection of songs that seem to work in the genre. My favorite song is track number one, “Somebody Like You,” which is actually not a typical song for the band. It is a very electronic feeling song with an epic chorus. The opening of the song is the perfect way to start an album or a live show for that matter.

The single off “Life Left to Go,” that is really drawing a lot of attention is “Stay,” which is the fourth track. This song is being picked up as the next big song by many of the nations leading top 40 stations. This is the perfect mold that Safetysuit has borrowed from the various 90’s band and all I think when I hear it is, hey it works.

Although the album does trail off somewhere towards the end there are a few hidden gems hidden there. The most obscure song on the album might also be one of my favorites. I cannot for the life of me decide why but the title track “Life Left to Go,” combines weird melodic patterns, overproduction and strong vocals into something that just works for me. It was a really pleasant way to finish off the album.

Overall this album contains a nice balance between hard rock anthems and soft, sweet ballads. Although this album won’t move into constant rotation on my iPod just yet it left me thinking that there is a bright future ahead for Safetysuit.