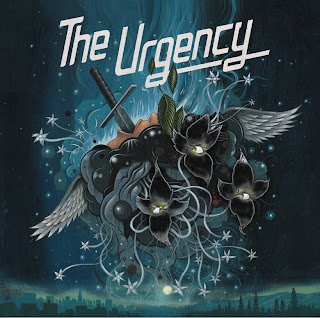 First reporting on this album a few weeks ago I wrote that upon my first run through I was hooked. The Urgency are from Brooklyn and other areas within the Northeast of the United States and you will learn a lot more about them as 2009 progresses. In this light I have decided that April’s album of the month should be this groups self titled first wide released album.

This album is full of possible singles right from the start. So many of these songs could be thrown onto MTV and really catch fire. For a few weeks me and some friends sat around trying to determine who this band sounded like. We generated names from Foo Fighters to Fall Out Boy before deciding that they sounded most like Coheed and Cambria.

Although I believe this is still a stretch it goes to show just how unique this bands pop/rock/alternative sound is. In an interview with The Truth About Music lead singer Tyler Gurwicz said that the band had “Too many influences to really do justice, and all for very different reasons.” There is something in the way the group runs in between the lines of current “emo” artists and great classic rock artists that makes them special.

Among my favorite songs on the album are “Rooftops,” which could very easily be the first single and “Stop,” both of which are fast paced anthems. My pick for slow song of the album is “All We Are,” which is not quiet by any means but does slow the tempo down into a semi-ballad. The final song on the album is titled “Lullaby,” and is a really cool creepy way to end the album. Trying to explain that song any further would not do it justice, it’s worth giving a listen.

Tyler’s voice can be described in just one word, epic. Memorable could of also been that one word but either way the group does more than the common band, combining great songwriting (including awesome hooks) and a sound that comes across as both familiar and unique. The full interview will be posted later this month closer to the release of “The Urgency,” on April 21st, but until then if you want to get an early listen go to their myspace or to iTunes and download “The Urgency – EP”