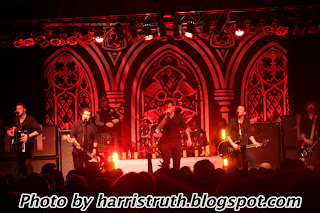 There are certain things that just make sense in the music industry in relation to geography. There is something special about seeing Bruce Springsteen in New Jersey, Billy Joel at Madison Square Garden, Reel Big Fish anywhere in California or Dropkick Murphys in Boston. Although St. Patricks day was still a week away, and we were not quite in Boston, the atmosphere inside the historic Webster Theater this past Monday night was truly incredible.

Although the string of opening punk rock bands were un-rememberable to say the least, anticipation grew throughout the day as people continued to become as intoxicated as possible. During each of the breaks between bands the crowd would cheer for the Murphys knowing that their set was still some time away. As I made my way to the front of the stage to take some pictures I was greeted by fans who wanted to have a good time and were going crazy when the lights dimmed on the set.

In their normal tradition the lights dimmed and a recording of “The Foggy Dew,” by The Chieftains and Sinead O’Connor came over the loudspeakers. This song is so perfect to help build the anticipation as it is written in a very traditional irish manner. The only thing that could be more fitting would be the re-enacting of a scene from “Boondock Saints,” or an appearance by David Ortiz. Although the song is nearly five and half minutes long, the crowd was willing to wait as the band took the stage to a flash of lights performing famous for nothing,” followed by “The State of Massachusetts,” and “Johnny I Hardly New Ya.”

The set kept a really high energy level throughout fueled by the passionate crowd, many of whom made the trip from Boston to see the hometown group. Towards the end of the set the group allowed dozens of people onto the stage including a hoard of girls and then later on an all out assault of random people. The group seemed intent on making sure everyone in attendance had an amazing time.

Saving the groups mega hit “I’m Shipping Off to Boston,” from a movie that has become a newer aged Boston tradition “The Departed.” This song fell during the encore and drove the crowd into a rage of dancing and drinking once again. Closing the show finally with “Kiss Me (I’m shitfaced)” the group continued their legacy of causing people to want to have fun. People flooded into the hallways smoozing with the opening bands but above all else buying Dropkick merchandise and reliving the concert over and over.

One thing goes without saying, the city of Hartford, helped by the Boston faithful love Dropkick Murphys as much as anyone else. The sold out show was the final show that included four other sell out shows and some much needed rest was ahead for the staff who had spent the last 100 hours or so in and around Webster Theater helping to make sure that everything ran smoothly. Weekends like this past one don’t come around a lot and no one new when a string of shows like this would be through again so it was better to soak it in and just saving being tired until a time when the Dropkick Murphys weren’t in town.