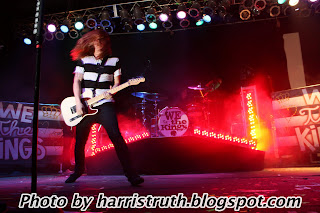 Day two of my weekend spent in the friendly confines of Webster Theater was spent listening to the familiar sounds of the fusion of emo and rock. I now, and for all future instances refer to this brand of music as alternative rock and no single band channels this better than Florida based We the Kings.

Although there were a few openers, the only one that truly caught my eye was The Cab. I will admit that I had a bias going in after my interview with Cash Coligan and my love of the songs “Bounce,” and “High Hopes and Velvet Ropes.” Just before The Cab took the stage I introduced myself to Cash (our interview was done over the phone) and he was such a nice guy taking the time to talk although he was just moments away from performing.

During my interview with Cash he said that the main thing he wanted fans to walk away from the show with was “wow, these guys are good at their instruments.” The idea that a pop band like The Cab are so concerned with instrumentation is a really nice thing to see. I couldn’t wait to find out for myself how good this group from Las Vegas, Nevada was.

Not disappointing fans they played about half of the songs off of their 2008 release “Whisper War,” opening the show with “Risky Business,” and finally closing the performance with their hit single “Bounce.” The bands instrumentation was just what Cash had said, there was nothing tracked (industry term for performing a portion of the show before the show, and playing it back during the performance), and they all could actually play and harmonize just as well as on their album.

Screaming girls (and a handful of guys) gave way to more screaming girls (and a handful of guys) as We the Kings took the stage with “Stay Young,” the fourth track off of their self titled major debut. Backed by an impressive lighting setup shaped into a large “W,” the band raced through their set list playing covers of Jason Mraz’s “I’m Yours,” and The Killers “Mr. Brightside.” During The Killers cover, Alex Johnson The Cab’s drummer joined We the Kings towards the end in a move that seemed to just be fun for the crowd (and for the band).

Ironically the band that has had three hit radio singles chose to save all three of them for the end of the show when they were played back to back to back. “Check Yes Juliet,” was followed by “Secret Valentine,” (the name of the tour) and finally ending with “Skyway Avenue.” It is interesting to note that “Check Yes Juliet was once an iTunes single of the week and is one of the first instances in which a group was launched with the partial help of the Apple platform.

The Cab’s final night on this tour, before they returned to sin city seemed fun for everyone as the band spent time meeting and greeting fans well into the night after the show. It is safe to say that bands like We The Kings can’t really go anywhere without the mass hysteria that surrounded Webster Theater from a very early hour that morning. We the Kings are preparing to stay on tour as they take the reigns of the Bamboozle Road Show along with The Cab, leading up to the big show in New Jersey at the end of April.