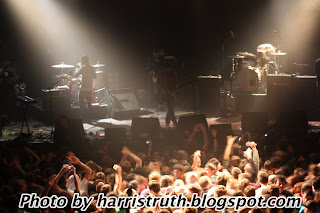 Brand New, a name that most people in the rock world are familiar with but at the same time, have not heard of in many years. That all changed a few weeks ago when the band announced they would play a string of shows in the Northeast (and one in Alaska). Among the college shows scheduled on the trip was a stop at the historic Webster Theater in Hartford, CT.

Rolling in with a crowd already beginning to gather around noon, the band attempted to keep a cloud of darkness around the shows, including not allowing people to bring in cameras. The buzz around this show was really extraordinary. Fans were limited to purchasing two tickets per person in trying to allow as many people inside as possible. The irony of this show is that it fell on the same night as another sold out show at the Webster Underground. Separated by just 20 minutes, NeverShoutNever! took the stage in the underground before Brand New stepped onto the main stage.

The Underground was packed to capacity with the usual crowd you would expect at this type of show; tight pants and brightly colored band shirts. Covering these two shows was tough and although I was only able to see a few minutes of the performance, it was a rocking show as the crowd was totally into it. After snapping some pictures of Christopher Drew (aka NeverShoutNever!) I jogged back into the main room as Brand New was about to perform.

Preceded by the indie rock sounds of MeWithoutYou and The Dear Hunter, Brand New certainly drove more life into the crowd. Above all, the anticipation of seeing a band that was underground for so long, kept the crowd really into the show. Opening with fan favorite “Jaws Theme,” the band used their mellow vibe to compliment the hard rocking points during the show. “Okay I Believe You, but My Tommy Gun Don’t” was a great example of the build into the harder portions of songs.

Clouded in darkness for much of their set, Brand New’s setup was lit very much from the back of the stage. This combined with heavy fog gave the band the desired feel. Among the more interesting things the took place on stage were songs that involved two (or even three) drum sets. This gave a really epic rock to feel to certain songs during the set. The band also performed a handful of songs that they had not played before giving the crowd a preview of what is to come.

Despite not playing my personal favorite song “The Quiet Things That No One Ever Knows,” the show was really enjoyable and the crowd seemed extremely pleased. Fan favorites such as “Seventy Times 7,” and “Jesus Christ,” fell late in the set giving people one more reason to go crazy. After a brief absence from the stage, the band returned for an encore that included “Play Crack,” and “Bangkok.” Running back and fourth between the two stages created an interesting challenge for the night but created an atmosphere around the rock club that was amazing.

After the show, the two crowds funneled out onto the same streets and mingled with the bands they had come to see. Despite the anticipation around Brand New, NeverShoutNever! clearly won the award for most screaming fans, as they went crazy just about every time they saw Christopher Drew (or thought they saw him). Many of the fans in attendance were returning home close to midnight, only to be back at Webster Theater the next night for the Secret Valentine Tour, featuring We the Kings and The Cab.