Anarbor Attempting to Re-Write the Book on Pop Bands 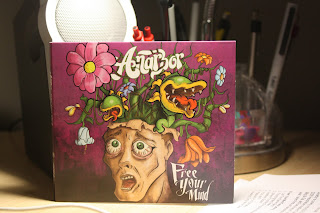 Stemming from Phoenix, Arizona Anarbor are on a mission to make sure you know their name and remember it long after all the other bands have gone home. Although the group has been around since 2003, they are about to release just their third EP length album, titled “Free Your Mind.” This album is a really fresh rock sound, with vocals that, although not as “fresh,” still hold up on their own. What really is fresh in their sound is the instrumentation. Upon first hearing it you don’t feel like your in a vacuum of overproduction (not a bad thing) but instead in a rock club hearing old fashioned, straight forward rock.

The lack of overproduction is something that is generally avoided by others in the genre such as Cute Is What We Aim For or Fall Out Boy. The vocal stylings of lead singer Slade Echeverriea are much more in line with this bands however. Despite the lack of a string section, the vocals are very similar to these other groups. still the combination of solid rock guitar and (comparably) whiny vocals is a a winning one in my book.

The goal of the music is to “…tell our listeners that we are here to stay and we are not a fad band that will fade out as soon as dance-pop is outdated,” said guitarist Mike Kitlas. Despite this claim, the group has not achieved stardom yet and the major flaw in this EP might be the lack of a killer single. Despite being a very well put together album, no single song screams “play me on Gossip Girl (or MTV if your old school).”

The tracks that are worth the longest listen and could be kept on repeat are “You and I,” and the lead off hitter “Let the Games Begin.” These two songs come the closest to being catchy and memorable, and really make you want to get up and dance. The whole EP is worth a listen and could drive me to see this band on their next trip through the Connecticut or New York areas. “Free Your Mind,” comes out this Tuesday and is available now for pre-order on iTunes.

P.S. When I contact publicist and request an album for review I always cringe when they send me digital copies for one simple reason, cover art is just that, an art. The art on this album is truly a testament to that, and is one of the best looking I’ve seen in a good long while.