Harris’ Album of the Month: Commitment by Lucky Boys Confusion 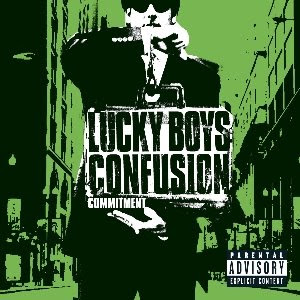 One of the greatest fusion bands of all time that went away just as quick as they rose to fame. Lucky Boys Confusion from Chicago, IL took the alternative rock world by storm just after the turn of the century with a combination of fast paced anthems, and slow reggae jams. To the die hard fans this was something that could never be replicated and with the band in a state of non-touring hiatus, it is unclear if most of the country will ever experience it again.

The bands second studio album, “Commitment,” is a masterpiece on so many different levels, displaying an ability for hit singles in songs like “Hey Driver,” and “Ordinary,” and great b-side jams such as “Sunday Afternoon,” and “Closer to our Graves.” The music stems from many different backgrounds, generally a place of intense emotion. The amazing anthem “Mr. Wilmington,” sings of a father who has lost his son to, from what we can gather, suicide. It is an extremely emotional song, but one that is so well written it is a can’t miss on the album.

Although the individual songs of this album can be appreciated, as you move deeper into the album many of the songs flow together in a way that few have mastered. It is very easy to just put this album on and just journey through the entire thing. Among the most unique aspects of the group is lead singer Kaustubh Pandav’s vocals. He has one of the more unique voices in current alternative rock. It is not whiney, or smooth, it is somewhere in the middle giving the band a huge boost.

As always, I love to know what my readers think of different albums so if you can, check out “Commitment,” by Lucky Boys Confusion and let me know your favorite tracks, or that you agree, it’s better when listened to straight through.