Cash from The Cab talks Rihanna, Bamboozle and Hit Singles 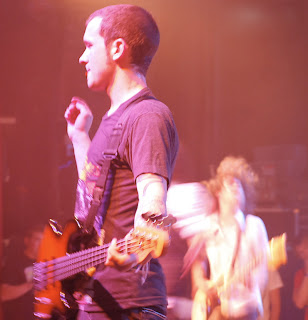 When you think of music and Las Vegas, four things should come to your mind; Barry Manilow, The Killers, Celine Dion and Panic at the Disco. Ok maybe those aren’t the first things you think of, but they very well should be. Amongst these legends, another is looking to break off the strip and into every bedroom in America, The Cab. Taking pop vocal influences and blending them with rock through the decades, The Cab has already established their hit capability and now look to continue their rise to the top.

If you are sitting here reading, thinking that you don’t know The Cab, stop. During the past few months “Bounce,” and “I’ll Run,” have been climbing radio charts faster than the wheels of a brand new slot machine. After naming “Bounce,” my song of the week many weeks ago and the #20 song of 2008, it was great to talk to Cash Colligan about how it all got started and where they hope to go next. “Me and Alex, one of the singers started the band out in high school. We actually didn’t like each other but for some reason we both just had the common interest in making music and passing spare time. The Cab basically came from him staying over at my house and we were both just blurting out random shit, everything we thought was in Vegas and for some reason I said “The Cab,” and it’s not like it was the best name in the world but it was the only one that didn’t sound obnoxious.”

From these humble beginnings the band was launched into signing a major deal by Panic at the Disco’s Spencer Smith, who was on the receiving end of their demo at a Cobra Starship show. With help by the already established Vegas rock group, The Cab was inked and began crafting their major release. Moving from Vegas greatness to Chicago greatness Patrick Stump was crucial in helping put The Cab’s sound together. “Patrick did like an overlook of our album and gave his input on what he thought would work, kind of like an executive producer.”

The album, titled “Whisper War,” also features both Patrick and Brandon Urie on the track “One of Those Nights,” the second single from the album. “Brendan happened to do a favor for us, they discovered us and what Brendan did (on the song) was sing on the record for us, his part was written.” Hearing the collaborative vocals between Stump and Urie is something that I have always enjoyed (sang together on “20 Dollar Nose Bleed,” from Folie a Deux). I found it interesting to note the bands influences. Cash told me that each member is influenced by other artists that have strong suites within the instrument. Alex Johnson, the bands drummer is inspired by drum rich bands such as Rush and Blink 182 while vocalist Alex DeLeon (note that the band has 3 Alex’s) is influenced by artists such as *NSYNC, and Rihanna.

The band is currently on the road with We The Kings (currently their 4th tour with them) as well as There For Tomorrow and VersaEmerge. In the coming months they will play under We the Kings again on the Bamboozle Road Show, leading up to their second performance at the New Jersey based festival. “Bands just hanging out and playing and having a great time. It’s a bigger stage, bigger audiences, even for bands that are smaller get the opportunity,” Cash said of Bamboozle. If you are in the New York or New England area be sure to check out The Cab soon:

Check out their myspace for more information.