Harris’ Album of the Month: Under a Killer Blue Sky by Jupiter Sunrise 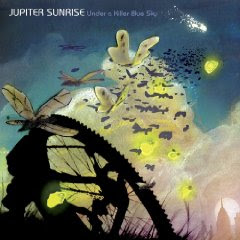 What does it take to be album of the month? You don’t have to have a killer sound, or hit singles, or radio play. Of course those things help to draw attention to your album, but the only thing that matters is having great songs strung together in what we call an album.

The first ever album of the month goes to an older album that got less recognition than it should of. Jupiter Sunrise, a band from Los Angeles released Under a Killer Blue Sky in 2004 and were one of the bands that was helped immensely by Myspace. Although this album was the last work the band would release it should be remembered as an excellent record.

The album itself to me is a masterpiece of modern day rock. It combines awesome hit singles and great anthems, slow ballads and great b-sides. Among my favorite songs are “Josie’s House,” “Arthur Nix,” and “September Girl.” This album is really only appreciated when played straight through from start to finish. If you are not the type of person that generally doesn’t listen to the whole album, for my me, please, get this album and give it a try. You will not be disappointed.

Another favorite track of mine is “Super X-Ray Vision,” who me and a group of friends determined to be written in the classic style of Eddie Money’s “Take Me Home Tonight.” I would also like confirmation of this, so please check out the song. Check out Under a Killer Blue Sky and let me know what you think of it.

Under a Killer Blue Sky by Jupiter Sunrise
Truth Rating: 4.19 / 5