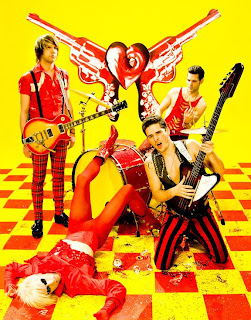 Inserting an album into my computer has always been fun. I anxiously await the notification that my new CD is ready for listening and dive right in. Usually I have a pretty good idea what to expect. I know the tell tale signs, an album cover featuring the cover black is an alternative or emo record, an album cover featuring red or pink is a huge pop star, and a black and white album cover usually symbolizes a heavy rock band (or at least one that is trying to appear that way). All this brings me to the latest release from New York based Semi Precious Weapons, “We Love You.” This album cover features yellow, red, bleach blonde and a very punk rock looking microphone.

The first thing I noticed about this band in general is there killer riffs. Right from the first song “Taste,” they’re groove and guitar playing during the chorus is awesome. It reminds me of old school KISS with a solid bass line and really funky guitars. The verse of just about any song on the album makes you just want to sing and dance along. Despite very strong starts the chorus’s in general left something to be desired. They were strong, yet lacked a hook that I kept waiting for. Track two “Magnetic Baby” (featured in Rock Band 2) continues the trend of solid versus followed by mediocre choruses.

The self titled third track is the first song that made me really want to listen over and over. From the very opening riff this song takes me back (hypothetically) to the 70’s with a very AC/DC like riff layered over with solid vocals. This is also the first song with, as Jack Black would say “A face melting solo,” performed by Aaron Lee Tasjan. The album moves through the motions following an extremely old school feel, always being led by bass, drums, and very epic sounding guitars. For some reason track five, “Genius,” reminded me of an underground Weezer song. Although seems like an odd comparison I don’t think it is a negative thing, there’s something about a slow start that just makes this song ring Rivers to me.

Clearly one of the more fun songs is titled “Her Hair is on Fire,” and is a slightly altered cover of Rock Master Scott & The Dynamic Three’s song “The Roof is on Fire.” This song is a lot of fun and thinking about it live, it could be really fun. Although each song draws from different areas of the music spectrum, I continue to hear a lot of AC/DC in the guitar and bass playing, and the more you listen the more lead singer Justin Tranter’s voice the more I enjoy it. Also appealing to the atheist in me, the song “Jesus,” sings “She only wants to fuck jesus,” works really well in the punk/glam/classic rock genre.

One special thing that is clearly absent from this record is synthesized anything. Just about every single recording in the last five years has had something in it that was artificially inseminated in a studio, this album breaks those ties. Just about everything in it is live to the touch. It is clear from listening to this glam rock band that just like a caged tiger only explains half it’s story, this band must be experienced live in order to grasp their potential. Anyone in the Hartford area should check out Semi Precious Weapons at Webster Theatre on February 4th, I’ll be there.