Harris’ Song of the Week: Torn on the Platform by Jack Penate 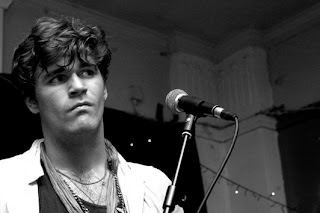 Jack Penate is the greatest singer/songwriter you’ve never even heard of. Although Jack has never toured in the United States his music speaks for itself and should be listened to at all costs. Matinee, his first and only studio album peaked at #1 on the Indie Album charts in the UK.

Torn on the Platform, is an awesome song, starting slow and quiet and building into a mix between ska (minus the horns) and traditional acoustic guitar anthems (Jack Johnson like). This is fun and funky dance music that makes you just wanna pelvic thrust to the nearest dance floor. If you do nothing else for the rest of the night find this guy on Youtube or attempt to download him illegally, or if your really desperate, email me and I’ll send a song or two. He really is worth the effort.

For now I can only dream about singing and dancing at a Jack Penate concert where it is customary for the entire audience to be onstage during the performance of this weeks song, Torn on the Platform.