Thriving Ivory and the Case of the Stolen Voice-box 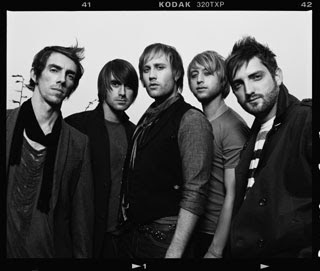 Thriving Ivory, a brand new band to the pop music scene in America, broke with their self titled debut album featuring the now hit single ‘Angels on the Moon.’ The band has had moderate success with this single and I do enjoy the bands sound. My problem with them, hasn’t this band happened already?

Clayton Stroope, lead singer of Thriving Ivory’s vocals sound eerily similar to two different more established front men. You don’t have to listen any more than their single to hear the similarity between Stroope and Gerard Way, lead singer of My Chemical Romance. Upon further listening I have a theory on Guns and Roses lack of touring in 2009.

Is it possible that Clayton Stroope is Axl Rose in disguise? I think these two scenarios are highly likely and if you would, listen to Angels on the Moon and tell me which person you think he sounds more like in the comments. I just want to know who’s voice-box is missing?