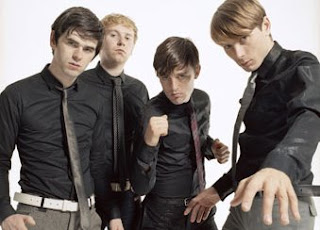 Franz Ferdinand has always been a band overshadowed by other albums, and other bands. Still, giving them a listen they have never done anything to blow me away and their latest studio album “Tonight,” is more of the same. I can’t say it’s a bad album, it just does nothing for me. As with any album there are songs that do hit me as being great singles or awesome b-sides but the general flow of the album is sub par.

The album leads off with ‘Ulysses,’ an odd song that is clearly attempting to capitalize on the rich success of electronic bands, such as MGMT, or The Ting Tings. The song seems weird in the context of the album but is not necessarily a bad song on it’s own. As the album progresses there are some hits and many misses. Among my least favorite songs are ‘Live Alone,’ and ‘Bite Hard.’ These songs seem like fillers and the latter is a very slow song that misses me completely.

As I said before Franz has had the misfortune of releasing at rather bad times all things considered. In 2004 when their self titled major debut released it came at a really solid time for music in the United States. Franz was unable to capture this momentum and use it to their advantage. At the same time as this release two other bands had singles from their major label debuts racing up the charts, The Killers and Jet. Both of these groups would go onto lead Major US tours and smaller but successful tours respectively, and produce better results from singles. Both bands sophomore albums were well received and lead to more tours and in the case of The Killers, worldwide stardom. Franz’s second album, which came out in 2005 fell on deaf ears and this next album has the potential to do just that.

It wasn’t all bad. I can point to a few more tracks that I was able to get into. ‘Katherine Kiss Me,’ the final song on the album was really well placed, a great way to wind down the album (though it might be better to just skip to this song). Although it is not typical Franz style it is still a nice song with good lyrics. My favorite song from the album is track three, ‘No You Girls,’ (which happens to have the same theme as ‘Katherine Kiss Me), a really upbeat song that makes me think back to the mild success of ‘Take Me Out.’

This was a solid attempt but unless Franz can get some great backing by a fun super bowl commercial or score a song on Gossip Girl this will just be another unheard album by the group from Scottland.

Key Songs to Listen to:
“Katherine Kiss Me” – Solid acoustic song
“Ulysses” – Pretty funky opening song
“No You Girls” – I hope this is single #1 or this album will be in trouble