Harris’ Song of the Week: Bounce by The Cab 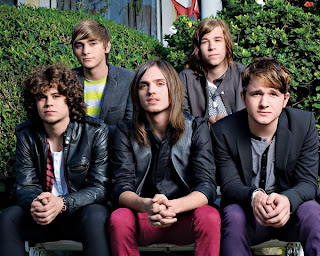 I haven’t had a case of “the song stuck in my headitus,” in a long time. I’m usually able to continue to move from song to song through an album or hit play on an endless playlist in my head. Over the few days this song has invaded my brain and whether I’m out to dinner, or playing Madden I just can’t stop humming or attempting to sing it.

The Cab is a group out of Las Vegas, NV who are hopefully going to follow The Killers to success. They have an interesting blend of electronics and emo rock, which makes me think Metro Station (but they actually seem good). No offense to Metro Station but when they play live its among the more fake shows I’ve ever seen. The Cab seem to be a closer resemblance to Backstreet Boys meets All Time Low.

Well listen to this song and then please report on how many times the chorus gets stuck in your head. It could drive you crazy. I have to give some credit to my runner up for song of the week. This is another song that has been circulating on repeat within my head. “Don’t Trust Me,” by 3OH!3 (the oddest band name ever) is another extremely catchy song that is worth a few plays. Check them out, let me know your thoughts.