I was just informed by a friend that not everyone is as well read on the Guns and Roses dilemma as others. Here’s the deal: GNR breaks up, Axel Rose sues GNR, Axel decides that he wants to remain playing as GNR, forms new group under GNR, other members of GNR form Velvet Revolver with Scott Weiland, Axel takes 10 years recording Chinese Democracy, and now its 2008!! 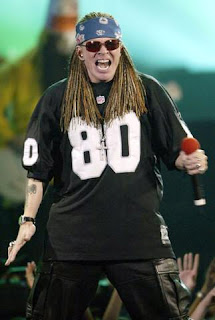 So I haven’t been to a concert in a while (for me) so I decided that I would start reviewing CD’s in preparation of picking the best album of the year (in the pop domain). Can’t think of a better place to start than the most anticipated album of the year: Chinese Democracy.

So after millions of dollars and more than a decade of bitching, moaning and oh yea, recording, Chinese Democracy is finally in stores (and on iTunes). The first question everyone will ask is: “Was it worth the hype and the wait?” My answer: “No.” Don’t get me wrong this album is really good and as a hard rock album really kicks some serious ass.

It is good to finally see a band coming back, in 2008, and putting out an album that kicks you in the face and makes you want to headbang. No offense to Velvet Revolver, this album beats anything to date they’ve put out. Velvet Revolver did one thing good, they wrote great singles, not albums. Chinese Democracy is much more complete than anything Slash and Scott Weiland have put together.

Back to my original point, was it worth the hype and the wait, and the answer is still no. Is this the best album of the year, no. If you figure out how much time and effort was put into this project, it is just crazy. Granted, in the hard rock world this is one of the better albums of the past ten years, but still, anything that you have to wait half a lifetime for (in my case being 20), better involve me, super models and a private island.

In conclusion, good job Axel, you’ve outdone Slash, put out a solid album and finally silenced the critics. There’s only one thing left to do, actually show up on the tour dates.

Key Tracks To Check Out: Better and Street of Dreams
Listen back to back, these songs (3 and 4) respectively highlight the best of this album.