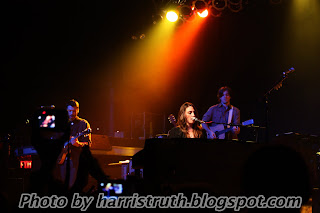 Pulling out all the stops, Webster Theatre has had a fall full of great concerts. From Hanson, to All Time Low, Cobra Starship, to Matt Nathanson, they really have had a lot of fun at the historic venue. Last week that trend continued with Sara Bareilles.

Sara Bareilles and some unfamiliar friends arrived in Hartford, on the final leg of their North American tour, before Sara and her band leave the openers at home, heading to Europe for some additional dates.

Opening the show for Sara was a relatively unknown band named Raining Jane. Raining Jane, formed in 1999 in California by four woman, combine an interesting mix of pop, rock and folk, with some instruments that many people in the audience had never seen before. Their percussionist plays on a cajon, their bass player occasionally breaks out a sitar and one of the guitar players also jams out on cello.

There sound is extremely unique and must be heard to truly understand. To make the comparison, its the vocals of Charlotte Sometimes, meets the songwriting style of Sara Bareilles meets the variety of a Dengue Fever. These girls are definitely worth checking out, especially if you want to hear something totally new and unique.

Second on the bill for the night was singer/songwriter Marc Broussard, a rocker with deep southern roots. Marc’s show is full of high energy funk songs, that gave the crowd a reason to at least shift form side to side. This was my first real introduction to Marc Broussard, and my immediate reaction to it was that it would be relevant in the 70’s and 80’s. His songs have an extremely old school funk feel that is really great to listen to, but would be closer to Stevie Wonder than Sara Bareilles.

Although this comes off in a negative connotation, that is unintentional. He was extremely impressive, and belts out some really amazing songs as part of a very lively show. He performed songs such as “Home,” and “Where You Are,” from his 2004 release “Carencro.” His newest album “Keep Coming Back,” features a song in which he duets with Sara Bareilles which unfortunately was not performed at this show.

With the crowd on the edge of their seats, finally Sara Bareilles hit the stage dressed in almost all black and the crowd literally hit the roof. There was an outpouring of affection, from both sexes in attendance towards Sara, which took her aback at one point during the middle of the show.

She started her set with a few songs from her breakout album “Little Voice,” including one of the hit singles “Bottle It Up.” She truly is a great performer, keeping even the dragged along boyfriends in the crowd content. Her piano was a standup black electric piano and she even shed her piano a few times to rock out on guitar.

As many artists with hit singles do, Sara waited for a perfect moment right in the middle of her set to hit everyone with “Love Song,” the song that took the world by storm when it was first released as a “Free Single of the Week,” on iTunes. Since then, “Little Voices,” has sold over one million copies world wide, with “Love Song,” reaching #1 on many of the worlds most important charts, including the Billboard US Pop 100.

The end of the show was full of some great performances. The final song (before the encore) was a cover of a classic Stevie Wonder song, “Living for the City.” For this song, Sara and her band were joined onstage by all of the members of Raining Jane and Marc Broussard’s band. This was a really fun moment in the show where everyone was onstage and just rocking out, including Marc and Sara as the belted side by side.

This was the type of performance we are used to seeing at the Grammy Awards as they sing a melody of a classic song with each person taking their turn. It was really amazing to see it happening on the stage in Hartford at the historic Webster Theatre.

After the rest of the members of all of the other bands had left the stage she played a song by one of her favorite bands, the Counting Crows titled “Sullivan Street.” In her own unique way she pulled the song off solo, playing on a ukulele. After this she ended the show with another fan favorite song, “Gravity,” which she performed alone at her piano.

After thanking the crowd that was totally in love with her, she left the stage and everyone in attendance left with huge smiles on their faces. Coming up in the following weeks at Webster Theatre are performances by Norma Jean, Bayside, The Academy Is and pop vocalist Ani DiFranco.