Harris’ Song of the Week: In Memoriam by Everybody Else 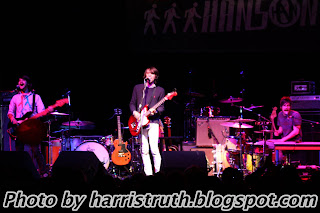 As is to be expected in a week full of concerts, this weeks song of the week comes from an artist that I did not plan to see but stumbled upon, and now cannot stop playing. Opening on the main stage for Hanson and Dave Barnes at Webster Theatre was a band from California named Everybody Else.

They caught my eye immediately because of their unique stage setup. Their drummer was set on the very edge of the stage, all the way on the right side (facing the stage) and was a centerpiece to the band. He not only sang, but he played tambourine and synthesizer while keeping a solid beat on the drums. Nothing taken away from the other two members of this trio, who all harmonize just as well as Hanson, or any other group that harmonizes well.

The sound of all three of their voices is pretty magical live and my ears were sold on the band. Their self titled album has a lot of catchy tracks on it, but ‘In Memoriam,’ is one of the best. The only problem I have is that their live presence and ability to harmonize live does not come through as well in their recordings. Nonetheless this band is worth giving a listen to, even if its just the one track.