Ben Folds: Rockin the City (Oh and the Suburbs Too) 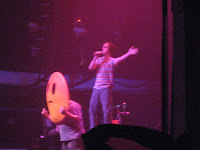 Being a person that loves concerts, and also loves experiencing new things, Ben Folds satisfied both of these cravings. Last week (9/30/08 & 10/1/08) Ben Folds played back to back shows at New York City’s, Terminal 5.

First, I would just like to point out that I had never been to Terminal 5 and I think it is an amazing place to hear live music. It has a great mix of class and grunge, that makes you want to come back. Terminal 5’s three floors each feature fully stocked bars and pretty decent stage views, and places to lounge before and after the show. Overall it was a very classy venue, perfect for an act like Ben Folds.

This concert was very interesting to me. The band released their new CD “Way to Normal,” (which I am listening to right now) on the final day of September, or the first night of his stint in New York. What does that mean? It means that most die-hard fans didn’t get a hold of the album until that day.

Still, under this set of circumstances, Ben Folds hit the stage and played almost all of this new album, and to my shock, the audience ate it up. The crowd was all about the new music, even though most of them had never heard many of the songs. Is this because its Ben Folds and people just love anything that comes out of his mouth? Well yes it is.

Seeing him for the first time was really interesting. He really is a master of his art, similar to those who came before him Billy Joel and Elton John, he loves to play and puts his heart into each performance.

After opening with track nine from the new album “Brainwascht,” (Brain-Washed) he continued to play many songs from the new disc. Among my favorites (and the best performed) were “Hiroshima,” which is a song about him falling off of a stage in Japan and cracking his head open. Of course he started this song by telling this story, only a true dork could be so bold.

Also songs such as “Dr. Yang,” and “Free Coffee,” were awesome songs that told a gripping story. Among the most amusing elements of the show was an idea that the band came up with while on a flight during their European tour last year. They decided that because albums seem to always get “leaked,” they would create fake songs to accompany each real track and release it themselves.

After mulling this idea over in my head, it occurred to me that not only is Ben Folds a nerd, but he is also a genius. What could be more fun than coming up with a second song with the title “ Bitch Went Nuts.” Of course, while in New York, he had to tell this story in great detail and then proceeded to play each song, followed by its “fake,” version as he called it.

For every song he would say something like, now we’re going to play the real version, or now we’re going to play the fake version. This seems like such a silly idea, but as described by Ben himself, this was so much fun to do. Needless to say, some of the fake songs were extremely funny or the other side of a story. “All of these songs are about my life because I’m just not that good at making things up,” he said to the crowd while describing one of the many stories.

One of the more well known songs from the new record is “You Don’t Know Me,” which featured vocalist Regina Spektor on the recording. The opener for the show, Missy Higgins, who is a pop vocalist from Europe stood in for Regina and did a fantastic job with the first single.

Of course, the reason people bought tickets in the first place was to hear the songs that has made Ben Folds a household name. Early on in the show he dropped a few oldies such as “Zak and Sara,” “Landed,” and “Gone.” After many more songs from the new album he finally came back with encore performances of “Army,” “Kate,” and finally ending the show in his second encore with “One Angry Dwarf and 200 Solemn Faces.”

Any serious Ben Folds fan should explore this album. After just listening to a few tracks I can tell that it is an impressive album, following the more toned down “Songs for Silverman.” This album is much more upbeat and has some great tracks on it.

Next on the tour Ben Folds heads to Louisville, Chicago and St. Louis. The tour wraps up on November 14th in Los Angeles before heading over to Europe. I would recommend going to see Ben Folds, even if you only know a few of his songs, it is definitely worth the trip, and also don’t be afraid to check out a new New York City venue in Terminal 5.