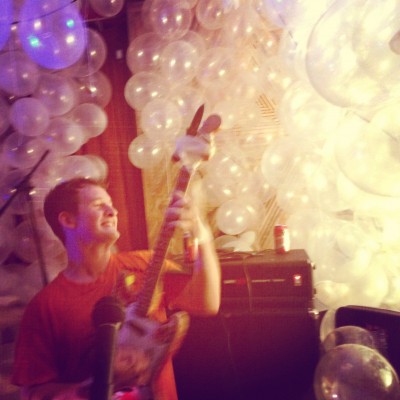 Ever since the dawn of the genre, cultural pundits have been announcing the death of rock ‘n’ roll.  In recent years this trend has continued, with writers pointing towards both the mainstream listening public and indie/underground gravitating more and more towards music based around synthetic instrumentation. While there is undeniable validity to this belief, rock ‘n’ roll has a way of coming back strong when it looks down and out. For every winter of Rap Metal there is a summer of The Strokes.

Whether rock ‘n’ roll is ready for a massive comeback right now is unclear, but if it is, Exploding In Sound Records have put themselves in a position to be the Sub Pop of this decade. Having spent the past few years assembling an impressive roster of mostly Boston based indie bands, their label showcase at Silent Barn for CMJ was a celebration of rock music.  The all day event kicked off at 3 PM with free pizza and continued until close to 1 AM.

Judging by the capacity crowd that was present throughout the showcase, Exploding In Sound has a lot to be excited about, and judging by the consistent quality of music heard all day, the excitement is well deserved.
First on the bill were new signee Krill. I last saw Krill perform in early August, they put on a good show then, but it was immediately clear the intervening time has tightened up the band quite a bit. They played an intense set, mixing old material along side new cuts that will appear on their Exploding In Sound debut in the near future. The fact that they packed the spot at 3 PM tells me these guys may be moving on to bigger venues very soon. Two Inch Astronaut, Grass Is Green, Palehound and Kal Marks all gave very good performances, though at a certain point they started to blend together a bit.

Having a label that is devoted to a specific sound can be a double edged blade. On one hand it breeds loyalty amongst fans of that sound, on the other it can lead to a labels roster seeming a bit indistinguishable. Ovlov broke the holding pattern with their intense brand of sludgy Dinosaur Jr. proto-alternative. Next Porches further expanded the sonic palette of the evening. Fast becoming an institution of the Bushwick scene, Porches blend keyboard and organs with uptempo rock. They stood out not only for their unique sound, but as a large ensemble band firing on all cylinders.

After Bad History Month, Roomrunner and Pile played their sets, it was time for Speedy Ortiz to take the stage. Easily the flagship band of the label, Speedy Ortiz have garnered accolades from major mainstream publications for their debut Major Arcana. While their sound is in line with the rest of the bands, their is a confidence and intensity to their performance. At one point, guitarist Matt Robidoux taped a knife to the neck of his guitar, bayonet-like and began stabbing at the balloons surrounding the stage. There was a furious nowness to their performance, as if, despite their throwback sound, this band has it’s eyes dead set on the future. I can’t help but feel the band and their label are destined for bigger and greater things, regardless of what the rest of the world feels about rock ‘n’ roll these days.