Review: Neko Case, One of the Years Best Albums 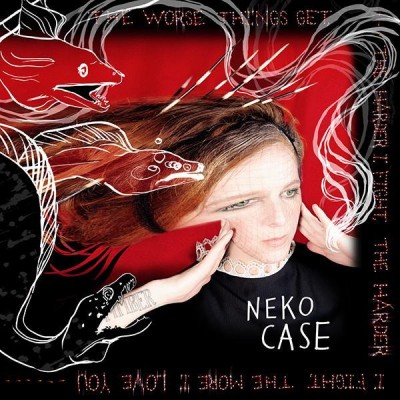 “I’ve got calling cards from 20 years ago” Neko Case confesses on “Calling Cards,” the beautifully introspective love song that kicks off side two of her new album. Given the way Case has embraced the rambling, road weary lifestyle of the touring musician, one is inclined to believe her. This statement could be meant as a love letter to an individual, or perhaps just the spirit of touring life itself, but either way it’s only a fraction of the personal and philosophical ground she covers over the course of The Worse Things Get, The Harder I Fight, The Harder I Fight, The More I Love You.

At this point in her career, Neko Case is alt-country royalty. She first broke in playing as Neko Case and Her Boyfriends (still one of the all time great names for a backing band), but found her avenue to big time success as a member of The New Pornographers. After spending the past decade releasing consistently superb records, most notably 2006’s Fox Confessor Brings The Flood, Case is still adding to her impressive catalog.

Filled with her trademark combination of naturalistic imagery and metaphors, The Worse Things Get isn’t so much a giant step forward for Case as it is a succinct combination of the qualities that have made her so compelling all these years. There are slower, more introverted tracks like “Where Did I Leave That Fire” and “I’m From Nowhere” that have always been the backbone of Neko Case albums, but she still brings a musical curiosity and lyrical depth that make them sound brand new.

On the experimental a cappella story song “Midnight In Honolulu” she tells the tale of a neglected child enduring verbal abuse from his mother at an airport, once again using her incredible vocal capacity, and her innate lyrical ability to use real life experiences to tell a story bigger than just one character or moment. Then there are the alt country rockers like “City Swans and Man,” where she lets the power pop chops she developed with The New Pornographers really unfurl.

While The Worse Things Get is a real album in the sense that it’s a deliberately sequenced artistic statement with ebbs and flows, “Man” deserves a deeper look. There has been a lot of discussion surrounding Macklemore’s song “Same Love,” and whether a straight artist should be writing about same sex issues so deliberately. As a straight man who hasn’t heard the song I can’t comment, but I will say that even though it was written by an ostensibly straight woman, Man is one of the most compelling pieces gender commentaries I’ve heard.

Not written explicitly about gender identity or as a takedown of the concept of masculinity, “Man” is simply a statement of purpose. “This is not an identity crisis, this was planned” Case sings with vitriol and intensity as she casually let’s the listener know she is a man, no air quotes, and if you think that’s wrong or silly then “you didn’t know what a man was until I showed you.”

Of course none of this would matter if the song wasn’t any good, but “Man” might be the most kick ass rock song of the year, so whatever you think of the songs content, you’ll be thinking it while bobbing your head and tapping your foot.

After the closing track “Ragtime” comes to a conclusion, there is about a minute of silence, then suddenly tape hiss appears, and we hear Neko Case say “that was awesome.” It’s likely this snippet was taken from the conclusion of a particularly fruitful studio take. I’d like to think it’s meant as a moment of self congratulation by Case to herself and her band for recording such an excellent album. After several listens, I can’t help but feel this moment is well deserved, if maybe a bit of an understatement.