Opinion: A Tale Of Two Albums: American Idiot & The Body, The Blood, The Machine

The mid-00’s were a peculiar time for mainstream rock. The grunge era was now far in the rear view, and the pop punk boom of the late ’90s had transformed into a new brand of mall friendly emo. Kick started, ironically enough, by pop punk poster boys Blink 182 with their underrated self titled album, this new wave of emo brought the sheen of pop punk to the formerly lo-ﬁ genre. Recorded in four-ﬁgure-an-hour studios with enough auto-tune to make Max Martin blush, this new wave of rock resembled mainstream pop like perhaps no mainstream genre of rock n’ roll before it.

This was the world Green Day stepped into when they recorded their seventh studio album. Having had the master recordings of about 20 songs stolen from their studio, the band decided to start from scratch and try something new. What they worked out ultimately became American Idiot. A rock-opera with a political and social message interwoven, American Idiot would go on to sell over 6 million copies in America. Now, when one Googles American Idiot the first response is a link for tickets to the musical adaptation, so that should give an idea for just how played out American Idiot would eventually get. However, taken on its own merits, it’s quite a solid album. The narrative is as strained and corny as you remember, and at 57 minutes it becomes an endurance contest, but “Jesus Of Suburbia” is a risky long form song that pays big dividends, and “Wake Me When September Ends” is one of the best maudlin ballads of the emo era.

Less than two years later, Portland super-group The Thermals released their own politically inclined pop-punk album, titled The Body, The Blood, The Machine. The album is a thrilling rush of infectious indie power pop with an intelligent, political punk edge. Though probably more directly indebted to Ted Leo than Green Day, The Thermals use undeniably catchy rock n’ roll to tell an allegorical story about a phantom political system abusing and misleading an unwitting public. 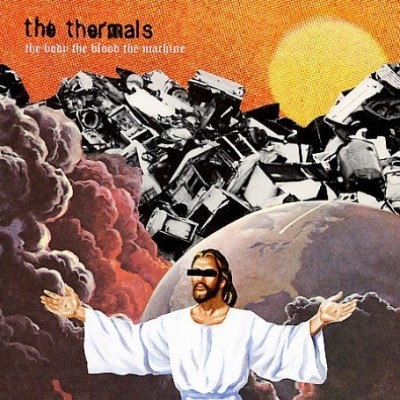 Where American Idiot gets bogged down in its own overwrought mythology, BBM smartly stays non-speciﬁc and vague with its metaphors. Religious imagery is used more metaphorically than as actual character designation. On “A Pillar Of Salt,” the indispensable centerpiece to the album, the narrator tells a story of escaping an oppressive situation by referencing the folly of Lot, and his inability to trust his best judgment. Further, the political theatre on the record is more subtle and satirical. When the phantom candidate on “An Ear For Baby” urges the crowd to put on their “ best suit, you know the one they’re gonna bury you in” one can’t help but feel the sinister intent behind his false smile. While the album does have an overarching message, The Thermals still make room for great stand alone tracks. “Test Pattern” is blissful piece of low tempo surf rock that leaves the political and religious imagery behind in favor of a good old fashion love song.

Ultimately, American Idiot was a bold move by a band at a crucial juncture in their career. If they had gone a safer route they may have just faded out like so many bands before and since. Instead they shot big, and while the album is not without its flaws, it stands as a testament to what an aging band can accomplish when they go for broke. Similarly, The Thermals have never been able to recapture the energetic perfection they found here (though 2009’s Now We Can See comes damn close), but here they made an album as thoughtful and downright fun as any I’ve ever heard. American Idiot is an album that deserves re-examination, The Body, They Blood, The Machine deserves re-discovery.