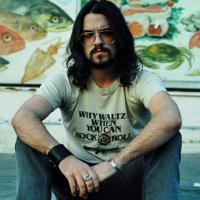 Shooter Jennings is pissed, and that’s a fantastic thing for the cesspool known as modern country music. On his new song, “Outlaw You” the singer/songwriter verbally bitch slaps his Nashville peers while smiling in their face the whole time, and no one in the CMT universe gets it.

“Outlaw you” is a funny track. If you listen to it without pretext, it sounds like every popular country song that’s plastered all over the radio, and that’s the point. But, when you listen to the lyrics, which assuming most modern country-pop radio listeners don’t, they’re being psychologically fisted by someone who actually knows what it’s like to be an outsider, and not just him, he’s a second generation outsider. It’s a seething, transparent language “EFF YOU” to everyone who’s responsible for making one of America’s original art forms into the sad joke it is today.

Everything on country radio at this point is a slick, formulated piece of trash that sells millions of copies to people who essentially have no real taste in music. Why? Because it sounds exactly the same; barely anyone on country radio writes their own songs, and even worse, their images are laid out for them far worse than the pop divas who are slathered all over supermarket tabloids.

Shooter’s father Waylon couldn’t catch a break back in the 70’s, along with Willie Nelson, and the rest of his Outlaw gang. They were labeled “Outlaws” because they refused to play along with the stringent rules of Nashville, and letting some dude in an office write their songs for them when they were perfectly capable at doing such.

But, once Waylon, and Co started selling a lot of records on their own accord, and writing their own songs, the game changed a little, and truly only for them.

As time rebounded and a slew of other artists came onto the scene, few had the musical clout, and the Nashville system was back in place, business as usual for the moneymakers.

The whole thing in their eyes is a proven winner. But, ask someone with a love of Johnny Cash, Hank Williams, Kris Kristopherson, Buck Owens, you’ll be explained, in detail of a flawed system that consistently churns out the Brad Paisley, and Kenny Chesney pretty boys, while talented singers like Shooter, and Justin Townes Earle have to create their own following song by song, show by show. The old fashioned way.

On Jennings’s previous album, “Black Ribbons” (my favorite album of 2010) Nashville essentially turned their back on him because he wasn’t playing to their game. Now, that “Outlaw You” is favorable to their hokey sound, they’ve patted him on the back and welcomed him right back into the cancerous, loving tentacles of their shadowy world that’s more mafia suits than good ole’ boys in cowboy hats.

What’s funny about all of this is that the song calls out every sell out, fake artist who’s sitting atop the charts, and calling himself or herself an “Outlaw”.

It blasts the system, the fans that buy the records, the absurdity of formulaic songs, and why they’re popular. You can’t be created into an “Outlaw”, an Outlaw is someone who tells the system to go fuck itself, and without any kind of apologetic nuance. That’s what punk was founded on, so was hip hop, and heavy metal. There are Outlaws in every kind of music, and by prepackaging one to sell songs like “ Am I the only one?” by Dierks Bentley you’re raping a tradition that once had some influence, some vanity to the people who are actually slumming it for their art, not wearing a corny baseball cap and singing hokey garbage that deserves to be thrown in a river like a sack full of unwanted kittens.

Jamey Johnson is at least honest. He’s had to sell himself short and appear on songs with some of the aforementioned sins against god, but he’s talented, and writes his own songs, and tells the stories that country music is SUPOSSED to be telling, not dreaming about.

Thankfully, Shooter is flexible, and with his new album coming out, he’ll be able to sell some copies on his own merit, and once he doesn’t he’ll be powerful enough to give that middle finger right back, and this time Nashville will have to bend over and take it, all the way up to the knuckle.