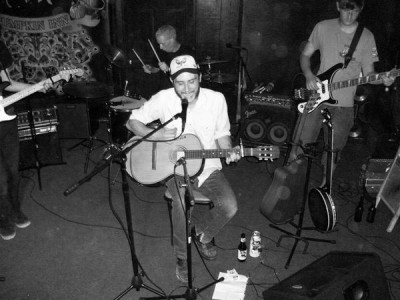 Risk is what can make the average album into something more. Risk is what makes records beyond brilliant, and into legendary status. When a group of musicians come together and make a conscious effort to challenge the climate of popular music, and purposely go left field when the others in the pack are scrambling for radio plays, it says something about the stones of the art in question.

Slackeye Slim is one of the emerging artists who are climbing up from the sewers, and under the cultural rocks, creating a scene with artists like The Imperial Rooster, Shooter Jennings, and Jd Mcpherson, and Hank III where the average kid who grew up on Punk Rock, Heavy Metal, Americana, and Country are creating this amalgamation of cross genre bending music that is re-defining the underground.

Slackeye’s new album “EL Santo Grial: La Pistola Piadosa” is a step into a totally new universe. It’s part spaghetti western, parts sonic landscape with nods of the hat to Nick Cave, Tom Waits, and The Velvet Underground. The music is fearful, chaotic, but intelligent, and paints a vivid picture into the mind of anyone listening.

The songs feel like cowboys standing at the swinging doors of a dusty saloon, looking for a drink, but checking the scene first. As the cowboy’s eyes see a villain off at the poker table in the distance, he knows a battle is upon him. 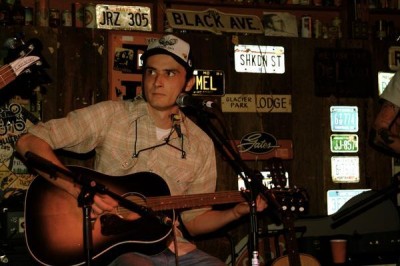 Death is permeated throughout the songs, and within those songs, a layer of red clay dust blows into the listeners mind via the rolling guitars. “The Chosen One part II” sounds almost like it was taken off Pink Floyd’s seminal “The Wall”. In parts, the music is vast, but at times is small enough to feel like parlor music of times past. That’s the strength of Slackeye Slim. On his previous record “Texas Whore Pleaser” Slackeye featured a lo-fi alt country sound that was soaked in Dead Kennedys, and Black Flag tributes. This new venture into territory that’s influenced by books, art, film and music is a grad experiment in social acceptance as well as sonic pleasure. The songs on “EL Santo Grial: La Pistola Piadosa” are full of religious chokeholds, while spiritual nooses hang from the passing trees.

“Em Mundo, Mi Emimgo” is a dangerous jaunt into criminal territory that conjures up visions of revenge, and hatred all while driving home a haunting vision of a man walking through the desert with a gun at his side, looking for a specific person to kill. The songs on “EL Santo Grial: La Pistola Piadosa” draw up a lot of comparisons to another musical madman, Mike Patton. If the two of these odd timed, crazy concepted brethren were to meet in a dark alley, the noises created could be some of the genre defining, ever heard. Slackeye Slim has blessed the musical world with a record so unique, so twisted; it’s a welcome revolution in anyone with a varied taste in music’s collection. It’s a porch record that could be used as a drinking soundtrack, or what could be listened to while penning the next great American novel. The songs are full of emotion, and Slackeye Slim does a superb job at exorcising a story of a man looking for things he’s lost, amoral and righteous.