Review: The Imperial Rooster Are Clowns 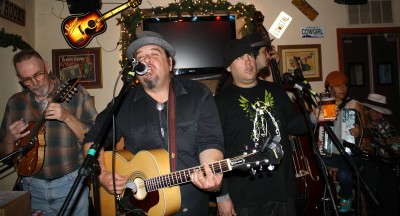 They’re fantastic, vaudevillian, psychotic, sociopathic clowns who write fantastically winsome music. Charming is a blanket term for a band so well versed in so many styles, but keep their hearts pinned to one of the founding souls of American music, folk inspired country. But, they write a folksy country hybrid with a sense of macabre, a sound that’s clear, abusive and dipped in gasoline, and fused with a side of napalm.

By mixing everything from moments of pure horny chaos ala Mike Patton, or Tom Waits, The Imperial Rooster can swoon straight back into it’s old timey country groove so hard that Waylon or Cash would smile down upon these Southwestern Boys, from whatever astral plain they might be on. On their new album Decent People The Rooster showcase a band willing to go in various directions, and not be afraid to go a little harder in one direction, than another. The music is heavy, it’s fun, and it’s steeped in risk. From zany organs to beautifully insane rhythms, Imperial Rooster have a lot to be proud of.

The opening track on Decent People tilted “Anything goes at a Rooster show” is a fast paced ride with lyrical maudlin that would unquestionably agree to the term that they’ve dubbed themselves as “Gonzo Roots Music”. Drugs, fighting, bathroom sex, women who can throw a punch all find themselves as lyrical themes throughout Decent People and while a lot of bands would get lost in trying to be fun, while still maintaining a sense of credibility, The Imperial Rooster use their love of violent tendencies to stoke the internal fire, and create something fearsome in the ashes of the wake of the party that was more than likely soaked in whiskey and clouded with thick Kush smoke.

“45 Seconds of Blood” has the intensity of a heavy metal song, but remains essentially still bluesy, but powerful as Slayer, that’s a distinct feature of The Imperial Rooster, they remain a band who’s influences are evident, even if they’re not still the punk rock kids, they more than likely were in their younger years. 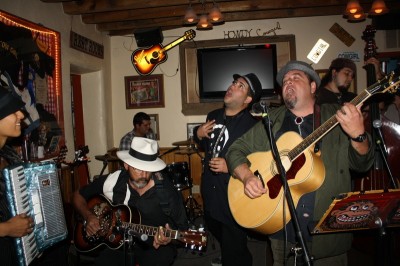 When the band finds a groove, the pocket gets hotter, tighter and downright filthy like an old Elmore James album, but in the spirit of Hank Williams. The songs on Decent People sound immense, bright and clean. They feature a cacophony of instruments that include a value to the music that lends a certain bigness”, like the New Mexico sky where the band is from.

The Imperial Rooster are quickly establishing themselves independently of a trend headed by such musical luminaries as Shooter Jennings, and Justin Townes Earle, creating a place in popular culture that showcases the true spirit of country music, the rowdiness of the original honky tonks, the barrooms, brothels and everything beer soaked and in between. Country music, before the age of plastic smiles, and pop standards was a ruthless music of outlaws, cowgirls gone wrong, and troubadours singing to save their souls. Thankfully a crop of kids who grew up on everything from punk, to metal, to alternative rock are finding a platform in what helped create a voice for a whole slew of people that were… voiceless.