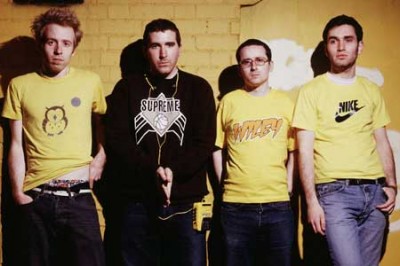 During Bentley’s interview with Hot Chip, he mentions that their “set at Coachella was my favorite of anything that entire weekend.” I was there, and I would have to disagree, but maybe Bentley didn’t see Plasticman, Whitest Boy Alive or The Specials. Hot Chip played on the second stage that had narrow sides making for an audience spread that was too deep without enough breadth. Maybe if I had been watching from backstage next to Jason Bentley, the performance would have struck me better.

It was during the Echo and the Bunnymen show on the second stage that I began to hear LCD Soundsytem starting up on the main stage. LCD was one of my favorite performances, though still not even in the top three. But the reason I bring them up is that during Jason Bentley’s interview with Hot Chip, he mentions their upcoming gig with LCD at the Hollywood Bowl.

This gig happened back in August of 2010. But to the best of my knowledge, this is not a rerun of Morning Becomes Eclectic. It was just recorded several months ago and put on the shelf I suppose. And it makes me realize how bummed I am that I didn’t go to that show at the bowl, now that LCD is disbanding.

Plus, Hot Chip would have been fun to see again. They are keeping the nerd rock flame burning brightly. On this in-studio session, the synthesizers have more heft and sparkle than they do in concert, or even on most of their recordings for that matter. And the live steel drums are given a punch that they are rarely warranted on the band’s albums You should listen to this show, even at the risk of it making you feel a surge of hope that you may be able to attend an awesome concert that has already passed.